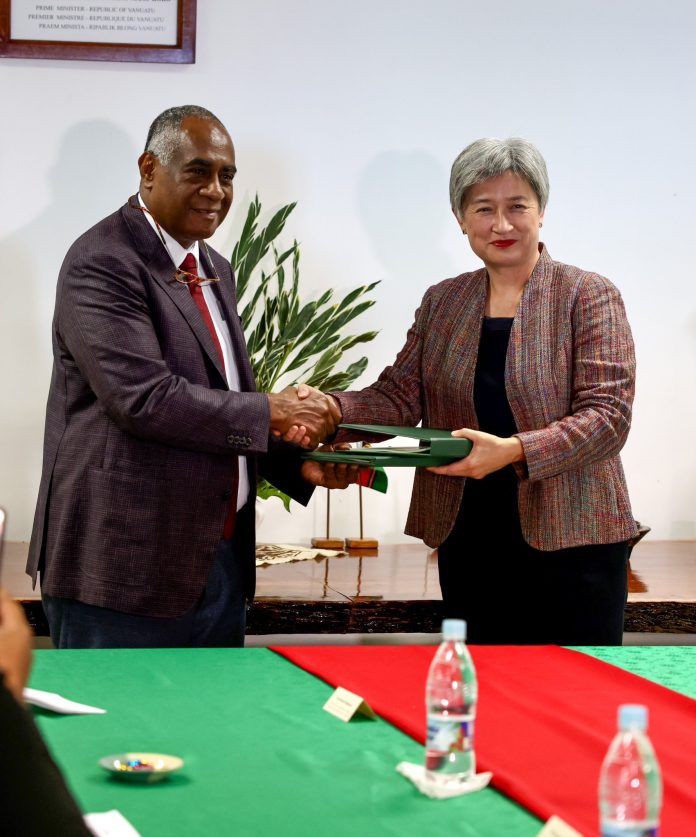 –The Australian Foreign Affairs minister, Penny Wong, has drawn a contrast with China’s approach to the Pacific by promising that a new security deal she signed with Vanuatu on Tuesday would be released publicly.

Wong, who is leading a bipartisan Australian delegation to the region, also left the door open to pursuing similar deals with other Pacific countries amid growing competition with Beijing for influence in the region.

Addressing the media in Port Vila, Wong announced the signing of a bilateral security agreement between Australia and Vanuatu that she said followed “40 years of cooperation between our security forces”.

“As two nations committed to democracy, accountability and transparency, we will ensure that the agreement is made publicly available,” Wong said.

That was clearly a reference to China, whose security deal with Solomon Islands has not been released publicly, except for a leaked draft version.

That agreement was signed before the Australian election, prompting the prime minister, Anthony Albanese, to accuse the then PM Scott Morrison of presiding over a “Pacific stuff up”.

Australia has said it is negotiating another new bilateral security agreement with Papua New Guinea – an issue that was on the agenda when the deputy prime minister, Richard Marles, visited Port Moresby in October.

When asked on Tuesday whether Australia was pursuing similar agreements with other Pacific nations, Wong kept open that prospect.

“Decisions about how a country wishes to engage with us, what level of cooperation, what priorities that country articulates, are issues for that sovereign nation,” she said.

“We, as Australia, come to that discussion with mutual respect. We come to it with a recognition that we are equal partners and we come to listen.”

The Coalition’s foreign affairs spokesperson, Simon Birmingham, who is part of the bipartisan delegation, said he warmly welcomed the signing of the security agreement with Vanuatu, which had been “in the making” since 2018.

Birmingham emphasised the importance of “Pacific-led solutions to security and stability” in the region, in another clear reference to the contest with China for influence.

“In a challenging and contested world, Australia and Vanuatu are at our strongest when we stand together and when we work together,” he said.

“The signing of this partnership and the delivery of these tangible results of our cooperation and partnership are a demonstration of how effectively we are standing together as nations.”

The agreement will deepen cooperation between the two countries on a range of security areas, including humanitarian assistance and disaster relief, maritime and aviation safety and security, policing, defence and border security.

The Australian government says the deal “recognises that our security cooperation must continue to adapt, including to better address the implications of climate change, to help manage the human security effects of Covid-19, and to meet shared challenges”.

A new joint security dialogue will help guide its implementation.

On Monday Vanuatu’s minister for foreign affairs, Jotham Napat, said his country had not established any security agreement with China and had “not even discussed any matter in relation to security”.

The bipartisan Australian delegation also participated in an official handover ceremony for the newly constructed Mala Base Wharf and police boat RVS Mataweli on Tuesday.

The minister for international development and the Pacific, Pat Conroy, said Australia was committed to resolving several problems with Australian-supplied Guardian-class patrol vessels.

Conroy told ABC TV there had “never been a time where more powers are interested in being in the Pacific” but countries in the region would “always have an enduring partner” in Australia regardless of which party was in government.

The four Australian politicians – also including the former Nationals leader Michael McCormack – have embarked on the country’s first bipartisan parliamentary delegation to the Pacific since 2019, prior to the pandemic.

They will travel next to the Federated States of Micronesia and then Palau.

Albanese was originally scheduled to travel to PNG this week, but the prime minister’s trip was postponed when he tested positive to Covid last week.

He is now expected to travel to the country in mid-January.