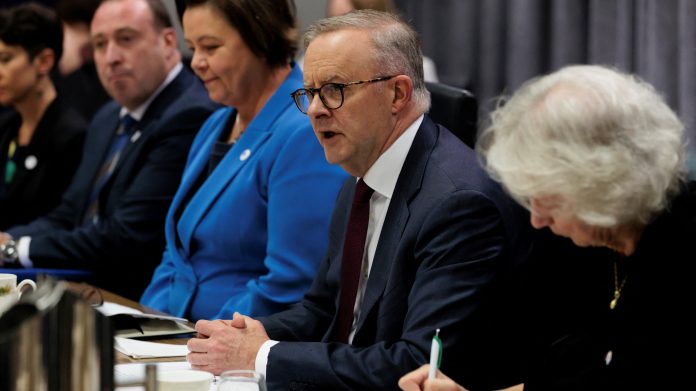 -The Australian prime minister, Anthony Albanese, has blasted the opposition leader, Peter Dutton, for trying to “score a cheap domestic political point” after the Liberal leader used the opening day of the Cop27 UN climate summit to demand Australia not compensate other countries for accumulating climate disasters.

After António Guterres opened the climate conference in Egypt with a stark warning that countries could either sign “a climate solidarity pact, or a collective suicide pact”, Dutton used the first parliamentary question on Tuesday to demand Albanese “rule out signing Australia up to compensating other countries as part of the deal being negotiated at Cop27 in Egypt”.

Albanese then rounded on the opposition leader, reviving a diplomatic disaster from 2015 where Dutton appeared to joke about rising sea levels in the Pacific.

“One of the things I won’t do, is, in front of a boom microphone, make a joke about our island neighbours drowning,” Australia’s prime minister said.

Albanese said the Australian government had already committed assistance to the region to help countries fight the existential challenges associated with the climate crisis and would continue to work with allies and partners because “one of the things we need to be conscious of is climate change is a national security issue”.

The prime minister also lambasted Dutton, a former defence minister, for dropping the ball on regional security, allowing China to launch a soft power offensive in the Pacific.

Addressing Dutton directly across the dispatch box, Albanese said: “You can’t say you care about strategic competition in the region while you continue with this sort of position”.

The minister for international development and the Pacific, Pat Conroy, who is representing the government during the first week of negotiations in Sharm el-Sheikh, told Sky News nations at the Cop had “agreed to discuss loss and damage on the basis that it doesn’t include compensation or admissions of liability”.

“We are facing an existential crisis in our region, which is climate change,” Conroy said. “The previous Australian government has blocked action on climate change, and that destroyed our relationship with the Pacific, leading to a vacuum that other countries have filled”.

It came as the Albanese government announced it had signed up as a founding member of a new forests and climate leaders partnership.

Australian government ministers said the UK-led voluntary agreement was dedicated to advancing a declaration made in Glasgow last year that global forest loss and land degradation would “halt and reverse” by 2030. The government said the partnership would also promote “sustainable production and trade”.

It was not immediately clear what, if anything, the commitment meant for native forest logging and land-clearing for agriculture in Australia. The government press release said the amount of forested area in Australia increased by 4.4m hectares in the decade to 2020, the second largest increase of any nation.

The ministers – Chris Bowen (climate change), Tanya Plibersek (the environment) and Murray Watt (agriculture and forestry) – said that Australia’s forest practices were “consistent with the focus on ensuring that forests and forest products provide climate solutions”.

The increase in forest cover over the past decade was in part due to regrowth of forest after intense clearing over the previous two decades. Felling of old-growth forest through logging and to clear land for the beef industry in Queensland, in particular, continues.

WWF-Australia welcomed the government’s commitment, saying it had shown “global leadership” on forests. “It’s great to see the Australian government acknowledging that we need to better manage our forests to meet the goals of the Paris agreement,” WWF’s conservation scientist Dr Stuart Blanch said.

But Blanch said Australia was still losing about 600,000 hectares of mature and regrowth forests and woodlands to deforestation each year, and was the only developed nation identified by the organisation as a global deforestation hotspot.

The former Greens leader Bob Brown, 77, was charged with trespass on Tuesday after camping in a logging coupe near Lake Leake in north-east Tasmania. Brown was part of a group of environmentalists protesting against the felling of native forest they said was nesting habitat for the critically endangered swift parrot. Scientists have estimated that about 750 of the species remain and that it could be extinct in a decade.

Australian and NZ invitation for co-hosted COP with Pacific must be...