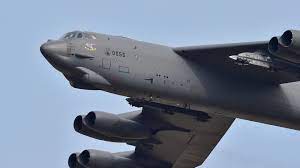 China has responded to reports the United States is preparing to deploy nuclear-capable B-52 bombers to northern Australia, saying the move could trigger an arms race.

On Monday night, the ABC’s Four Corners revealed the U.S Air Force was planning to build a “squadron operations facility” and an adjoining maintenance centre for six B-52 aircraft at Tindal Air Base, south of Darwin.

“Defence and security cooperation between any countries should be conducive to regional peace and stability and not target or harm the interests of third parties,” Zhao said.

He said the U.S had “increased regional tensions, seriously undermined regional peace and stability, and may trigger a regional arms race”.

B-52 bombers have the ability to deliver long-range strikes using both nuclear and conventional weapons, and have been the backbone of the U.S Air Force for more than 60 years.

Experts say having bombers that could potentially attack mainland China based in northern Australia was a warning to that country, as fears grow of an invasion of Taiwan.

U.S war planners and analysts have revised their estimated timeframe for when Beijing might look to take Taiwan, to between 2025 and 2027.
They say the growing importance of northern Australia to the US made Darwin and Tindal Air Base a target for China in a war.

It’s unknown when the deployment of the aircraft will begin, but the plan comes amid an upgrade of defence assets in northern Australia, including the expansion of the Pine Gap intelligence base.

Lisa Natividad — a professor of social work at the University of Guam — said placing the B-52s in northern Australia was “not a surprise in any way” but put her island territory at “absolute risk”.

“When we look at the six B-52s that are projected to be stationed in Tindal, it’s consistent with the experience that we’ve had here on Guam — B-52s, B stealth bombers, B-2s, the whole arsenal of military air force planes and weaponry is stationed here.”

“There is a bomb that China has in its arsenal called ‘the Guam killer’, that is not OK,” she said.

“We, the Indigenous Chamorros, have no beef with China but, because these bases exist here, containing those [military machines], it puts us in absolute risk.

“We are a community that was invaded because of these [weapons] during WWII and that trauma caused a lot of problems in our community and [with] our people.”

Chinese President Xi Jinping has been ramping up militarisation rhetoric around the reunification of Taiwan, notably during last week’s national congress, where he was re-elected for a third term.

“The Pelosi visit to Taiwan heightened the tensions around what could become aggressive interaction with China and, as with Australia, these bombs could be directed towards us as a result,” Professor Natividad said.

“The cadre of what [U.S] have stationed here just continues to expand. So, in terms of provocation, it is very telling if you’re on the other side where [these aircraft] are facing: towards China.”

Professor Natividad said the move “almost certainly does not” act as a deterrent to China’s aggression.

“We’re often told by the U.S Department of Defence that we are safe because of their presence. But our historical experience has been the opposite. And we won’t be confused about that,” she said.

With a strong anti-nuclear movement in the Pacific, Professor Natividad said the move “absolutely” strained the relationship between the US, Australia and Pacific nations.

“People in the Pacific continue to experience the very negative impacts [of nuclear testing],” she said.

“When we hear about the threat to our peace and security in this region, it’s almost as though superpowers look at us like we’re dispensable because we’re small islands with small populations.

“But we are still here, these are our homelands. And it is not OK for us to be put at such risk in the name of these geopolitical tensions and games over power,” she said.