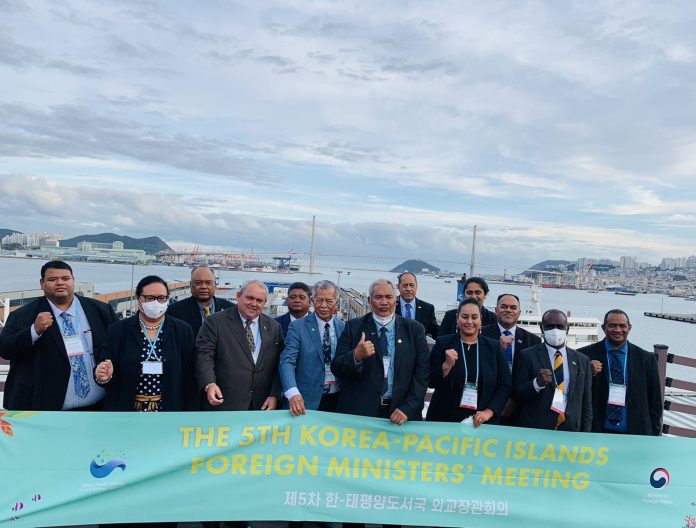 The 5th Korea-Pacific Islands Foreign Ministers’ Meeting, chaired by the Minister of Foreign Affairs of the Republic of Korea, was held in Busan on 26 October 2022. Representatives from the Cook Islands, the Federated States of Micronesia (FSM), Fiji, the Republic of the Marshall Islands (RMI, Nauru, Niue, Palau, Papua New Guinea, Solomon Islands, the Kingdom of Tonga, Tuvalu, and Vanuatu, and the Secretary General of the Pacific Islands Forum (PIF) participated in the meeting.

Under the theme of “Vision for the Resilient Blue Pacific: Freedom, Peace and Prosperity”, and in support for Forum Leaders’ 2050 Strategy for the Blue Pacific Continent, the Ministers engaged in broad discussions on the close friendship and cooperation between the ROK and Pacific Islands, and ways to further strengthen the collaboration such as in the areas of sustainable development including economic development; climate change and disaster risk and resilience; ocean governance, maritime affairs and fisheries; people-to-people exchanges and other matters of mutual interest. The Ministers affirmed the importance of utilising existing regional mechanisms, including the Pacific Islands Forum and Council of Regional Organisations of the Pacific, for cooperation and partnership.

The Ministers, valuing that the Foreign Ministers’ Meeting was established as a key forum for consultations to deepen the practical cooperation and mutual understanding between the ROK and the Pacific Islands, welcomed the 5th Ministerial Meeting held face-to-face and hosted by the ROK in Busan.

Recalling the outcomes of previous ROK-Pacific Islands Ministerial Meetings, the Ministers commended the Republic of Korea’s initiative to hold the first ROK-Pacific Islands Summit next year with a view to contributing to the freedom, peace, prosperity, and resilience of PICs, and to further deepening the ties of cooperation in the region.

The Pacific Islands Ministers, noting with satisfaction the ROK’s continued efforts to expand the scale of ODA and enhance development effectiveness for Pacific Islands, welcomed its commitment to strengthen development cooperation with Pacific Islands. The Ministers also noted with appreciation the ROK’s willingness to align regional development cooperation with the vision and priorities of the 2050 Strategy for the Blue Pacific Continent recognising the strengths and value-add of the ROK in the Strategy’s thematic priorities such as Technology and Connectivity; Climate Change and Disasters; and Resources and Economic Development.

The Ministers expressed appreciation for the valuable role played by the ROK in responding to COVID-19 and underscored the need for continued close joint efforts in recovering from the unprecedented economic and other impacts of the COVID-19 pandemic, working through national and regional systems and exploring innovative and collective approaches in trade and investment to address the economic impacts and position the region to enhance future regional responses to such events.

The Pacific Islands Ministers noted with appreciation the ROK’s continued contributions to the ROK-PIF Cooperation Fund (RPCF) since 2008 for capacity-building and technological support for the Pacific Islands. The Ministers, emphasising the importance of the effective operation and boosting of the visibility of the RPCF, agreed to continue to engage in communication to further enhance the modalities for the RPCF including alignment with the 2050 Strategy for the Blue Pacific Continent. The Ministers looked forward to the effective implementation of the following six projects, funded by the RPCF: (“Climate Prediction Services Phase 2 (2018-2022)”; “Application of Multisensory Remote Sensing for Controlling Illegal, Unreported, and Unregulated (IUU) Fishing Activities (2020-2024)”; “ROK-PIF COVID-19 Recovery Project (2020-2022)”; “Republic of Korea-Pacific Islands Trade and Tourism Promotion Project (2019-2022)”; “Enhancing E-commerce Opportunities for Pacific Micro, Small and Medium-sized Enterprises (2021-2024)”; and “Development of Decision Ready Tools to Support Coastal and Marine Spatial Planning (2021-2024)”).

The Ministers also agreed to consider working together in supporting the Pacific E-commerce, Quality Infrastructure and Trade Facilitation initiatives.

The Ministers, noting that Pacific Leaders have declared a Climate Emergency in the Pacific region, underlined the need for close concerted efforts in the international community to adapt to climate change which poses a threat to the very survival of humankind and to mitigate the damage resulting from it. The Pacific Islands Ministers commended the ROK’s continued endeavours to reduce its greenhouse gas emissions by 40 percent by 2030 and achieve carbon neutrality by 2050.

The Ministers underscored the importance of ensuring COP 27 in Sharm El Sheik delivers an ambitious outcome that reflects the need to urgently scale-up ambition and implementation to limit global warming to 1.5 degrees above pre-industrial levels, enhance efforts by developed country Parties to at least double their collective provision of climate finance for adaptation to developing country Parties from 2019 levels by 2025; advance work on the ocean-climate nexus; show meaningful progress with the deliberations on the new collective quantified climate finance goal; and support the Glasgow Dialogue on funding arrangements for averting, minimizing and addressing loss and damage and the operationalization of the Santiago Network on loss and damage.

The Ministers underlined the importance of securing financial resources to address climate change. The Pacific Islands Ministers welcomed the ROK’s commitment to increase contributions to climate finance, including an increase in Green ODA. The Pacific Islands Ministers also placed an emphasis on the importance of creating the Pacific Resilience Facility (PRF) to support the disaster response and efforts to cope with climate change in the Pacific.

The Ministers reaffirmed the importance of the continued role of the Green Climate Fund (GCF) in the implementation of the Paris Agreement and response to climate change. The Ministers noted with appreciation the support of the Global Green Growth Institute (GGGI) for the Pacific Islands’ swift transition toward a low-carbon green economy and climate change response.

The ROK Minister noted the efforts of Pacific Leaders to call on the UNGA for a resolution requesting that the International Court of Justice to provide an advisory opinion on the obligations of states under international law to protect the rights of present and future generations against the adverse impacts of climate change.

The Pacific Islands Ministers appreciated the ROK’s participation in and support for the Rising Nations Initiative (RNI), officially launched to protect the statehood of Pacific Islands and safeguard the rights and heritage of their populations from the unique challenges posed by rising sea levels.

The ROK noted the Pacific Leaders’ Declaration on Preserving Maritime Zones in the face of Climate Change-related Sea-level Rise, which claims that the 1982 UN Convention on the Law of the Sea provides the basis for the Declaration to ensure maritime zones cannot be challenged or reduced as a result of climate change-related sea-level rise.
The Ministers noted with concern the global biodiversity crisis and supported global action to raise the level of ambition for the development and adoption of the future global biodiversity framework at COP 15 including adequate means of implementation.

The Ministers, noting the risk of marine pollution caused by plastics, radioactive materials and radioactive wastes, reaffirmed the importance of the sustainable use of marine and fisheries resources, environmental protection and the marine ecosystem for human health and safety. The Ministers also reiterated the importance of providing ample data about the risk of marine pollution and consultations with the parties concerned.

The Pacific Islands Ministers noted with appreciation the ROK’s contribution to the capacity-building in climate prediction through the ongoing ‘Climate Prediction Services’ implemented by the ROK-PIF Cooperation Fund (RPCF).

The Ministers called for the expeditious finalization of the agreed text for the internationally legally binding instrument under the UN Convention on the Law of the Sea (UNCLOS) on the conservation and sustainable use of marine biodiversity of areas beyond national jurisdictions (BBNJ), and for its subsequent adoption and entry into force.

Recalling the concerns on the potential threat of nuclear contamination to the health and security of the Blue Pacific expressed at the 51st Pacific Islands Forum Leaders Meeting held in July 2022, and sharing a common understanding that radioactive waste and other radioactive matter which is discharged into the sea must be safely disposed of from a scientific and objective standpoint and in accordance with relevant international law and standards, the Ministers reiterated the importance of ensuring international consultation and independent scientific assessments, and agreed to work together to preserve a healthy ocean.

The Ministers shared the view that eradicating Illegal, Unreported and Unregulated (IUU) fishing is important for the effective preservation and management of marine and fisheries resources. The PIC Ministers commended the valuable part played by the ROK for capacity-building in the PIC’s sensing for controlling IUU through the ‘Application of Multisensory Remote Sensing for Controlling Illegal, Unreported, and Unregulated (IUU) Fishing Activities’ project implemented by the ROK-PIF Cooperation Fund (RPCF). The Ministers agreed to work together to achieve a comprehensive agreement on fisheries subsidies, recognizing that appropriate and effective Special and Differential Treatment for developing and least developed countries should be an integral part of these negotiations.

The Ministers, noting that cultural and people-to-people exchanges are a very basis for solid ties of cooperation and partnership, serving to deepen mutual understanding between the ROK and PICs, agreed to work together to expand such exchanges.

The Ministers, recognising that resuming direct flights is important to revitalize the people-to-people exchanges between the ROK and PICs, agreed to actively seek measures to enhance connectivity.

The Ministers shared the view that the DPRK’s nuclear and missile programmes present a grave threat to peace and stability on not only the Korean Peninsula but also the entire region and the world, emphasised the need for a united and firm response by the international community, and urged the DPRK to return to negotiations. The Pacific Islands Ministers expressed their strong support for the ROK government’s ‘Audacious Initiative’ for a denuclearised, peaceful and prosperous Korean Peninsula.

The ROK Minister, conveying his appreciation for the Pacific Islands’ continued support for the ROK’s initiatives and efforts in the international arena, requested the Pacific Islands’ support for the ROK in the elections for international organisations such as for serving as a non-permanent member of the UN Security Council for the 2024-2025 term and a member of the International Tribunal for the Law of the Sea in June next year.