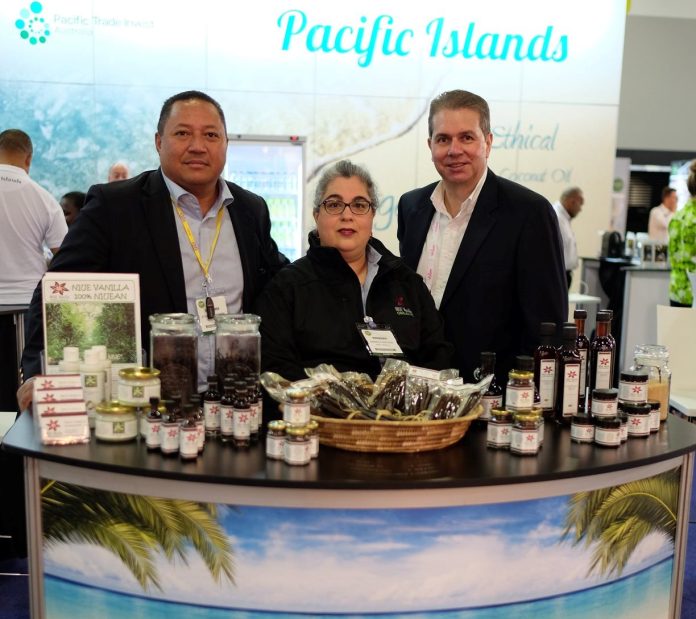 Having recently returned from exhibiting a number of premium Pacific products at Fine Food Australia, the Southern Hemisphere’s largest, and arguably most impressive, food industry event, as well as the Melbourne International Coffee Expo – I found myself reflecting on the long history that Australia has as a major trade and investment partner with the Pacific region. While this relationship runs deep, market access for Pacific goods remains challenging, and although recent years having seen an explosion in the range and excellence of premium Pacific products, many of these are still largely unknown to the Australian market.

With a shared history spanning centuries, the first record of modern trade between Australia and the Pacific is from 1793, where records show a shipment of pigs from Tahiti landed in Sydney Harbour. This small act marked the beginning of a new era of trading as valuable cargo began to be exchanged in both directions. Over the years as ideas of sustainable commerce have developed, as has the commodity of choice – shifting away from the sandalwood, pearl shells and bêche-de-mer of the past, towards a myriad of high-value, low-yield goods like coffee, cocoa, and spices.

Today, Australia is the destination for 63 percent of Pacific Islands exports, with Pacific Trade Invest (PTI) Australia’s most recent Pacific Islands Export Survey reporting that Australia and New Zealand remain key target markets for exporters in the Pacific. On the other side of this coin, less than 1 percent of Australian imports in 2021 originated from the Pacific, with Papua New Guinea accounting for 90 percent of that figure.

The benefits of engaging in increased trade with the Pacific are plentiful for Australia. Broadly speaking, it has long been understood the myriad of ways in which international trade and investment are critical to the Australian economy. Countries that are open to international trade tend to grow faster, innovate quicker, improve productivity, and provide higher income and more opportunities to their people. Engaging in increased trade with the Pacific not only benefits Australian consumers through access to an increased range of better-value goods and services, but also helps to drive economic growth and improve livelihoods—both locally and across the region.

The Pacific region produces an astonishing array of premium products, and while the sheer diversity among Pacific Island countries makes it difficult to speak of universal economic characteristics, it is clear to see that there is immense potential for export to the Australian market. This is particularly so for niche products that are low in yield but high in value. Examples of these include some of the wonderful vanilla, spices, coffee, cocoa and kava coming out of the region, none of which would be amiss in luxury nor boutique markets across Australia. It was only recently at Fine Food Australia, that an internationally acclaimed patisserie marvelled at the quality of a premium Pacific-based vanilla on show. With much potential for use across the Australian restaurant and hospitality scene, the Pacific remains an undiscovered market of gourmet and suitably high-end produce.

The creative industries in the Pacific are also rich and diverse. Drawing on cultural histories and traditions, they are the epitome of production that has a niche competitive advantage in the market. Maketi Ples, a PTI Australia initiative from some years back, sought to promote business to business (B2B) relationships through an annual gallery of high-end Pacific art. The connections facilitated at this event have over time led to a number of highly successful ventures. One such example of this is Among Equals, am Australian-based social enterprise aimed at empowering bilum weavers of Papua New Guinea through ethical trade. Not only have Among Equals been able to grow the international profile of bilum significantly, but they have also managed to raise the price point of bilum both internationally and domestically to much success, all while regularly featuring on the pages of luxury magazines like Vouge and Marie Claire. In doing so, we can see just how mutually beneficial our creative industries in the Pacific can be, as well as how they can flourish, and belong, in an Australian market.

As Australia seeks to strengthen its relationship with the region, trade once again become a key leveraging tool. A parliamentary enquiry earlier this year sought to understand how Australia could strengthen its relationship with the Pacific, with several key submissions calling for the Australian Government to invest in better Pacific literacy for Australians. Incorporating some of the many of premium Pacific Island products available into pe-established value chains here in Australia provides an opportunity for the wider Australian public to learn more about what Pacific Island countries produce. Through this ‘education of the market’, there is real potential for value chains of this type to sustain and grow production in Pacific Island countries.

While we can recognise the multitude of reasons premium Pacific Island products belong in the Australian market and the potential they offer, we must also recognise the unique challenges that Pacific Island economies face when participating in international trade. These include small size, distance from markets, expensive transport costs, a heavy reliance on imports, a remarkable vulnerability to natural disasters and, increasingly, exposure to the effects of climate change. When combined, these characteristics of island economies—most of which arise from intractable features of economic geography—mean that the cost of production in the Pacific is intrinsically much higher than it is in most other parts of the world, leading to a host of complexities down the value chain.

While trying to unpack these complicated and nuanced issues into a few simple paragraphs is akin to trying to boil the ocean in a day, one thing is clear – that Australia must take these unique features of Pacific Island economies as the starting point for the design of new initiatives to improve trading relations with region in which it also calls home. It is only through doing so that all parties can flourish.

Having grown up in Aotearoa New Zealand, a Māori proverb comes to mind, “nau te rourou, naku te rourou, ka ora te manuhiri”. Translated, this reads “with your food basket and my food basket, the people will thrive”. It is through this ethos I believe we can, and must, navigate this ocean of opportunity together.