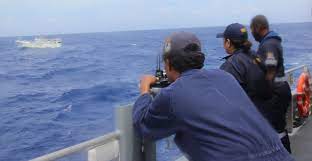 Pacific island nations must take ownership and improve maritime security as it is now urgent for law enforcement agencies to work together and enhance their network to beat the criminal networks now infiltrating the Pacific region, a report says.

The report of the Pacific Regional Law Enforcement Conference, which was held in Nadi, Fiji in August says increasing understanding, capability, and coordination across the complexity of the maritime domain is necessary as it is crucial for Pacific goods transit, resource management, food security and cultural stewardship.

“Whilst maritime domain awareness has been acknowledged as central to disrupting transnational organised crimes, the trend of distant water fishing nations pressuring Pacific Island Countries to disengage from pursuing legal restitution for vessels impounded because of illicit fishing has made the issue far more complex.,” the report said.

“However, Pacific nations have been assisted greatly by the Forum Fisheries Agency, which has provided a strong regional framing for enhanced coordination and has led to some emerging examples of national and bilateral operations.”

The report predicted that transnational crimes, particularly illegal and unregulated fishing could increase because of the current global circumstances – including slowing economies and the conflict in Ukraine – which will have flow on impacts for the Pacific. We are likely to see an environment where crime will increase, particularly cybercrime and illegal unregulated fishing.

The Pacific Transnational Crime Network had declared way back in 2004, that ‘no single organisation can do it alone’ and remedied the challenge through the partnership with Pacific Immigration Development Corporation and Oceania Customs Organisation enabled Transnational Crime Units staffed by officers from police, immigration and customs which increased domestic and cross-country sharing.

However, the conference raised the importance of having legal backing as transnational crime units were “only as good as national legislation”.

“Furthermore, sovereignty over national laws and policies is paramount which means that transnational crime units are good for information sharing but cooperation can be more complex when it comes to investigation – particularly when an investigation extends across borders,” the report said.

“Law enforcement agencies need to keep up with how transnational criminals are adapting to maritime surveillance.”

The report gave the example of the Vietnamese ‘Blue-Boats’, a method by criminals to beat surveillance.

The “blue boats” get their name from the painted blue coat used to conceal their movement at sea which makes it difficult to spot by aerial or sea surveillance and are constructed from material, like wood, that make them difficult to detect by radar, the report said.

According to agencies, these boats travel in groups as there is a need to be self-sufficient in their illicit fishing activities and they also used engines extracted from old motors of heavy goods vehicles.

However, the inadequate legislation in dealing with blue boats is a concern for Pacific Island nations.

“With regards to transnational crimes, we in the Pacific have an expanded definition of security including tackling transnational organised crimes which was singled out in the Boe and the 2050 Strategy. Laws and responses need to be drafted with inputs from experts so it can do its job properly. Some legislation in the Pacific needs addressing so it can more effectively support responses to transnational organised crimes. This requires the Governments to resource efforts that drive law reform and inform how to prosecute transnational,” Nola Fassau, International Legal Advisor for the Pacific Islands Forum Secretariat said.

For example, the Solomon Islands lack legislation in imposing proportional penalties for seized vessels and their crews resulted in crew members of a vessel that was illegally fishing fined US$100 and three captains were sentenced to four years imprisonment.

Also. identifying captains of vessels was another challenge as there was no interpreter and reluctance by crew members to point them out.

Meanwhile, the intersection between transnational crimes and biological threats was also examined by conference participants who considered the current levels of knowledge, behavior and practice of frontline law enforcement working across borders of Southeast Asia.

A presentation emphasised that equipping law enforcement agencies with adequate biological threat awareness was a key challenge in supporting both the disruption of transnational crimes and the biological threats that can often accompany it.

“Participants at the conference were urged to consider that the nexus of biological threat and transnational crimes was also inherent in the Boe Declaration indicating that traditional law enforcement agencies have a key role in biological threat prevention,” the report said.