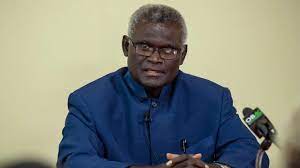 Such concerns include threats to ban foreign journalists critical of the Chinese government.

Dr Chalmers told reporters before the meeting that the face-to-face was “an important opportunity … talk about all of the issues we confront”.

“You can anticipate from that challenges in the region and the broader geopolitics that we all confront, particularly in our neighbourhood, will be something they’ll discuss,” he said.

The prime minister announced plans to push back the election until 2024, arguing his country couldn’t afford to fund pay for the election as well as the upcoming Pacific Games.

He labelled the offer as foreign interference and “an assault on our parliamentary democracy”.

Opposition foreign affairs spokesman Simon Birmingham branded the delaying of the Solomons election and rejection of Australia’s help as disappointing.

But he welcomed the engagement with Sogavare off the back of the Solomon Islands prime minister’s visit to the U.S and dialogue with President Joe Biden.

Tensions in the Indo-Pacific have soared after the Solomon Islands signed a security pact with China earlier this year, with concerns it could lead to Beijing establishing a military base.

In a statement on Wednesday, Albanese said Australia and the Solomon Islands had a “strong security partnership, based on decades-long policing and maritime co-operation”.

“As members of the Pacific family, we are committed to working together to face our shared challenges,” he said.

“I look forward to engaging with prime minister Sogavare on building a strong and prosperous Pacific region, based on principles of transparency, respect and partnership.”

The Australian Strategic Policy Institute also warned Beijing is attempting to influence public discussion in the Solomons through propaganda and information suppression.

Its new report accused Beijing of pushing a “fabricated narrative” about Australia, the United States and Taiwan instigating riots in the Solomon Islands in November 2021.

“When the coalition was in government, we actually did a lot of work to support the Solomon Islands,” she said.

“We made sure that when there was another uprising not so long ago there was support in place from the Australian Federal Police.”

But Andrews said Australia couldn’t turn a blind eye to “”what China’s actions have been and will continue to be in the Pacific”.