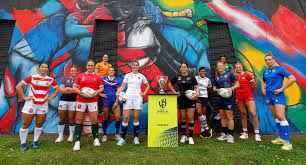 Captains of all 12 nations competing at Rugby World Cup 2021 gathered at the world-famous Eden Park in Auckland on Sunday as anticipation reaches fever pitch ahead of kick-off on 8 October.

Eden Park has twice hosted previous men’s Rugby World Cup finals in 1987 and 2011, and a record-breaking women’s rugby attendance will witness the opening day of action with more than 30,000 fans expected for a triple header which culminates with hosts New Zealand facing Australia at 19:15 local time (GMT+13).

The captains lined up in front of a mural on the wall of Eden Park, specially created for the tournament by artist Paul Walsh as part of a series entitled ‘Support Our Sisters: The Art of Rugby’, which consists of seven bespoke, large scale street artworks in locations across New Zealand in celebration of women’s rugby.

With 26 matches taking place across three venues in Auckland and Whangārei from 8 October to 12 November, Rugby World Cup 2021 promises to be a transformational celebration of the best of women’s rugby.

The 12 teams have been drawn into three pools of four teams each ahead of the quarter-finals, semi-finals and medal matches, culminating in the final on 12 November at Eden Park.

The ninth edition of the tournament, and the first to be held in the southern hemisphere, will showcase the phenomenal growth of the women’s game on and off the field, attracting and inspiring a new generation of girls and boys to play and support rugby.

With the venues ready for action, the remaining tickets selling fast, and the teams fine-tuning their preparations, New Zealand is set to host a very special tournament, billed as rugby’s greatest family reunion.

Hosts New Zealand are five-time winners and current defending champions, while world number one ranked England enter the competition on a record 25-match winning streak.
The tournament will begin when France and South Africa take to the Eden Park pitch at 14:15 local time on 8 October, followed by debutants Fiji versus England at 16:45 and the highly anticipated blockbuster match between New Zealand and Australia at 19:15, which will be preceded by a performance by Rita Ora to entertain the record-breaking crowd.

New Zealand co-captain Ruahei Demant said: “I will probably feel emotions I have never felt before. You kind of dream of opportunities like this, playing a Rugby World Cup at home but you never think it would happen. To be one of the lucky ones, the right time in our careers, the stars are aligned. I can’t describe it because I don’t even know what it is going to be like.

“I think it is cool too, just the fact that 30,000 people are coming here to support women – that has never been done before in New Zealand, never before. It is exciting to see the growth among fans and support for women’s sport in general, let alone women’s rugby.”

New Zealand co-captain Kennedy Simon said: “We’re extremely excited. It felt like only yesterday it was 100 days to the World Cup, now we are into the final week and we are raring to go. It is really exciting that we get to play in front of our family, our home crowd. We have over 30,000 fans so it is going to be interesting to see what that actually sounds like in Eden Park for women’s rugby.”

“Preparations have been going awesome. We have got The Professor, Wayne Smith. He is an incredible human who just makes everyone feel at ease and makes just the environment such a hard-working, thriving place. We have got Ted, Graham Henry, working with our coaches, we have got Mike Cron working with the forwards. It is an awesome place to be.”

England captain Sarah Hunter said: “We’ve been waiting so long for it and now we’re less than a week away from the tournament starting here at Eden Park so it’s all getting very real and very exciting.

“It’s incredible what this team has done, the journey we’ve been on and the games that we’ve won but we take nothing for granted. We celebrate those moments and significant milestones but we’re here for the World Cup and our focus is on our next job, which is Fiji and our preparation for that. We focus on the here and now and don’t get carried away with what is to come in the future.

“Each World Cup that I’ve been to I’ve seen the growth and it get better, to see more than 30,000 fans coming to watch the opening day of the tournament shows just how much the game has progressed and people are seeing how brilliant women’s rugby is and are wanting to get involved. It will be a really exciting and special day on Saturday.”

France captain Gaelle Hermet said : “We are super excited, being here in New Zealand in a country that culturally speaking live and breath rugby. We are very happy to finally be there for this Rugby World Cup. Our group is super excited to get things started with our first game. This is it, we are one week away from our first game so it’s very concrete and we can’t doubt anymore, we simply need to play rugby.

“It’s very important to start well since we come with big ambitions and the objective to win this Rugby World Cup. But to enjoy is as important, not everyone gets to play an opening match at Eden Park at a Rugby World Cup. We want to give it all and have no regrets because today we are ready, ready to play, ready to take our chances. We look forward to it.”

Australia captain Shannon Perry said: “It’s been a long time coming but this is a great place to have rugby in the heartland of New Zealand and the opening day at Eden Park is going to be a massive occasion, not only for women’s rugby but for rugby around the world. It’s going to be absolutely epic. It’s really good to see New Zealand and the whole Southern Hemisphere really embrace the tournament, you see it all around town on the billboards, and it’s really exciting to have it in such a rugby rich nation.

“It’s an exciting group coming through in our team with a lot of young talent, but a lot of experience as well and I think that will put us in good stead for this campaign. It’s a very humbling experience to be around the game for so long and to be skipper of this team is something extra special.”

Fiji captain Sereima Leweniqila said: “It has been a tremendous journey. We are both grateful and excited ahead of our first Rugby World Cup match ever. Since before we left for New Zealand, we have received great and ongoing support, something very new for us. When we arrived in the country, we have met the local Fijian community and we hope they will show up in numbers.”.