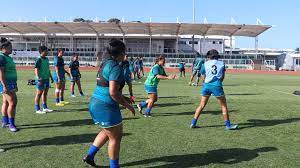 Designed to help accelerate the growth of the women’s game in the Pacific, the programme ran from 19-24 September and exposed the players to world-class coaching from Daryl Gibson, Toutai Kefu, Seilala Mapusua, Filoi Eneliko, Paul Downes and Mere Moto.

Participants were selected based on their performances at July’s Oceania Rugby Women’s Championship 2022, and it was hoped that the Women’s Combine, the first of its kind globally, could help unearth talent for next year’s Super W tournament.

Having been put through their paces, and conquered the dreaded bronco test, Samoa forward Easter Savelio and Tonga fly-half Shonte To’a were both delighted to have been able to showcase their talents.

“It’s been an amazing campaign,” Savelio told World Rugby. “I’ve honestly learnt so much from this campaign.

“Coming into this my expectations were very much up there, and I think those expectations met what they wanted us to be doing here in the combine.

“I honestly enjoyed this week, a lot to learn from different coaches as well and I think that’s one thing I’m very thankful for is that we’ve been able to be coached by some amazing coaches from all over the world.”

“It’s been so empowering”

To’a, meanwhile, said that the combine helped ensure that “the hidden gems are now finally being polished and being brought to light”.

“I think being surrounded [by that] in this environment is so empowering as a female athlete.”

According to World Rugby Women’s High-Performance Manager Nicky Ponsford, the combine exceeded expectations both in the quality of players identified and the education coaches were able to give them.

The week was so successful in fact that discussions have already been had about staging another Women’s Combine next year.

“I think it’s delivered exactly what we wanted it to and more,” Ponsford said.

“The players have been brilliantly engaged and I think they’ve taken a lot out of it, and their commitment and their learning has been fantastic.

“They got better and better all week as we gave them more stuff to do and they’ve just really taken it on board.

“And we’re in the position that we’re identifying some really talented players to take the next step as well.”

She added: “As a principle, giving players opportunities that they wouldn’t otherwise have, I think is hugely important, and the opportunity for them to showcase their talents where they wouldn’t necessarily be seen otherwise is fantastic.”

The opportunity the Women’s Combine has given to players who live in Papua New Guinea, Samoa or Tonga in particular was something both Savelio and To’a believe could be game-changing for the women’s game in the Pacific.

“The only time they’re able to showcase themselves is if they get selected into, say, Manusina or the Tonga rugby team, or the PNG [national team].

“Over here (in Australia and New Zealand), we may have the resources for us to use, but our sisters back home on the island may not have those resources that we have access to.

“And so, an opportunity like this and what Oceania Rugby has created is definitely an eye opener for all of us because we are able to get given the resources that are needed.”

To’a added: “I think this has been a long time coming. The people that played before us, this is what they were striving for, and they built the building blocks for us to be able to be where we are right now.

“Now, as a collective, to shine a light on our Pacific people, it has given little girls at home hope, and I think once our people have hope, they become the most resilient people that you can possess.

“If we plant this seed right now, it’s going to flourish.”.

Race for PNG head of state