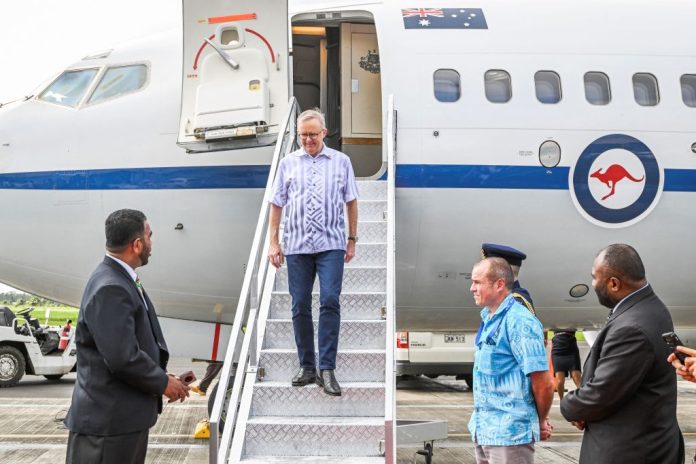 The state funeral of a respected international leader is always a solemn event but inevitably also an occasion for an impromptu summit. Certainly, a wide range of issues including the war in Ukraine, the global energy crisis and post-pandemic economic recovery will be discussed by world leaders outside the official proceedings of Queen Elizabeth II’s funeral.

While Prime Minister Anthony Albanese will join allies, G20 partners and Indo-Pacific colleagues in these talks, he also has a regional agenda that will have begun on his journey to London.

In consultation with New Zealand, Australia offered to provide transport for invited Pacific island leaders to the funeral. This offer extended to being picked up by the Royal Australian Air Force to join the Australian flight. Papua New Guinea, Samoa, Solomon Islands and Tuvalu have accepted.

Although it appears China’s President Xi Jinping is unlikely to attend the funeral, Beijing’s security challenges in the Pacific islands region as well as more broadly will provide the subtext for much of Albanese’s generous support to the ‘Pacific family’.

Most of the members of the Pacific family have compelling national and diplomatic reasons for wanting to join Albanese in attending the funeral of the late queen and to meet her successor.

When King Charles III ascended to the throne of the United Kingdom on the death of his mother, he became head of state for around half the membership of the Pacific Islands Forum (PIF).* Besides Australia and New Zealand, King Charles assumed the crowns of Papua New Guinea, Solomon Islands and Tuvalu. In addition, via New Zealand, he is the head of state for the Cook Islands and Niue.

Perhaps rather more regionally consequential, King Charles became head of the Commonwealth of Nations, albeit not by hereditary succession but as per an agreement at the 2018 Commonwealth Heads of Government Meeting (CHOGM).

In the current environment of geopolitical rivalry regarding China, holding the Commonwealth together may be one of the more important challenges facing the new king. For many decades, the Commonwealth has been an important vehicle internationally for shaping and promoting democratic values and defending a rules-based international order.

Queen Elizabeth mentored the Commonwealth through difficult periods of decolonisation in various parts of Britain’s empire so successfully that, when the Pacific’s turn arrived, entry into the Commonwealth appeared welcoming, uncontroversial and virtually automatic.

Indeed, being part of the Commonwealth club has been so attractive that every eligible PIF member has joined. Today, more than four-fifths of the PIF states are members of the Commonwealth. Even twice-suspended Fiji resumed active membership after the suspensions were lifted.

Over the nine decades of its evolution, the Commonwealth has shifted from being a means for the dominions to negotiate their political and foreign policy relations with ‘Mother England’ to embracing the post-colonial concerns of the majority of the current 56 members.

The key tangible benefit for participating in the Commonwealth rests in the breadth and variety of its membership. The smallest Pacific states meet biennially with leading developing states as well as significant G20 countries on a level playing field.

By influencing the CHOGM agenda on issues of importance to them, PIF nations can amplify their concerns and influence globally. Recent meetings have addressed climate change, the blue economy and cybersecurity—all matters that have had high salience on the Pacific’s regional agenda.

Corridor diplomacy enables the Pacific leaders to lobby effectively individually and collectively on matters of particular concern using a common language with a shared body of values and experience.

In addition, the Commonwealth secretariat provides ongoing administrative support, which, for four decades, has had programs specifically targeted to the needs and vulnerabilities of small island states. These include aid facilitation in addition to linkages with important UN economic and development agencies.

The importance of the Commonwealth to the Pacific islands, however, is less its breaking new ground on their agenda than the role it has played in shaping and reinforcing the core interests and values that they have adopted themselves regionally.

The PIF has made parallel assertions, adapted to regional circumstances, particularly in the 2000 Biketawa Declaration and reaffirmed through the 2018 Boe Declaration.

Significantly, both the Commonwealth and the PIF adopted mechanisms to promote and protect the implementation of these values. The 1995 Millbrook Commonwealth Action Programme provided for suspensions and expulsions for violations of the core principles of the Harare Declaration.

In part modelled on Millbrook, the Biketawa Declaration’s provisions included mechanisms for regional support to defuse an impending crisis as well as the processes to intervene should a serious breach of its principles occur. Both sets of sanctions were employed against Fiji after the 2006 military coup.

The 2003 Latimer House Principles provide another important crossover linking the commitment both the Commonwealth and the PIF have made to promoting democracy and the rule of law. This statement sets out agreed best practice for implementing parliamentary democracy, which has had significant influence in the Pacific.

By history, democratic traditions and institutions, the Commonwealth ties with the Pacific islands have made significant contributions to democracy in the region. Challenges to judicial independence in Kiribati, the peaceful transfer of power in Samoa and media freedom in Solomon Islands serve as indicators that the Commonwealth with King Charles III at its head will remain relevant.

A flight to Queen Elizabeth’s funeral will provide a sober but useful opportunity for Australia and the Pacific family to reminisce on the importance of the common values they share and perhaps renew their commitment to them.

The exact membership of the PIF is uncertain at the moment. There may be only 14 members. Kiribati has left the regional body and the Marshall Islands has asserted that it couldn’t prevent its denunciation from taking effect. Given the reconstitution of the PIF under the 2005 treaty, the special arrangement for the territories of French Polynesia and New Caledonia may be invalid.

Chinese police to give ‘management and leadership’ training to Solomon Islands...