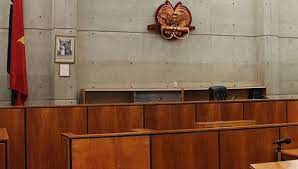 The Papua New Guinea Supreme Court has ruled that none of the provisions of the Organic Law on the Independent Commission Against Corruption (ICAC) were invalid, ineffective or unconstitutional.

Justice David Cannings handed down the five-man Supreme Court decision Wednesday at Waigani based on an application by the Ombudsman Commission (OC) seeking an interpretation on the constitutionality of ICAC.

The court comprising Deputy Chief Justice Ambeng Kandakasi, Justice Cannings, Justice Derek Hartshorn, Justice Joseph Yagi and Justice Jacinta Murray, said, “Though there is a duplication of some powers and functions of existing constitutional institutions, that does not render the ICAC invalid or ineffective.”

The Ombudsman Commission referred 26 questions of constitutional interpretation and application regarding ICAC to the Supreme Court under Section 19(1) of the Constitution.

The questions concern the constitutionality of various provisions of ICAC, which was made by the Parliament in 2020 pursuant to Division VIII.3 of the Constitution (the ICAC).

Division VIII.3 was inserted by Constitutional Amendment No 40 of 2014.

The Attorney-General was the only party as intervener.

The questions on ICAC covered five areas including its purpose; qualified rights for the exercise of the right to vote and stand for office and in particular whether section six of the ICAC was unconstitutional; duplicity of functions; independence, and; a breach of human rights, whether certain provisions in ICAC violated the human rights provisions of the Constitution.

The court held that questions regarding the purposes of the ICAC were vague and hypothetical and declined to give an opinion on them.

“The Organic Law did not have to comply with the requirements of section 38 of the Constitution,” the court said. The court added that the investigative and prosecutorial powers and functions of the ICAC were deliberated by division VIII.3 of the Constitution.

“Though there is a duplication of some powers and functions of existing constitutional institutions, that does not render the Organic Law on the ICAC invalid or ineffective.

The court concluded by saying it found none of the provisions of the ICAC to be invalid or ineffective.

It is premature to say that SIICAC is doomed to fail