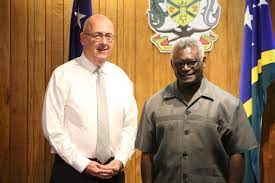 The Solomon Islands government has hauled in Australia’s High Commissioner to complain after the ABC’s Four Corners program aired an episode exploring how China has been rapidly building commercial and security ties with the Pacific Island nation.

The Pacific Capture program examined the impact of Chinese state-owned companies in Solomon Islands and revealed one of those businesses was negotiating to buy a forestry plantation on the island of Kolombangara with a deep-water port and airstrip.

But the ABC story angered some senior government figures in Solomon Islands.

Prime Minister Manasseh Sogavare has struck an increasingly hostile tone towards media outlets in the wake of the furore which was sparked by his government’s decision to sign a security pact with China.

One government source said  Sogavare and senior officials were “furious” about the program and saw it as part of a deliberate and concerted effort by Australian media organisations to undermine the government and damage ties between Honiara and Beijing.

The ABC has been told that High Commissioner Lachlan Strahan was called into the Foreign Affairs Ministry over the episode, and that officials warned him negative media coverage by Australian outlets could damage ties between the two countries.

It’s not clear what Dr Strahan said in response, or exactly what Solomon Islands government hoped to achieve by making the complaint.

The ABC has editorial independence, which means federal government ministers and senior officials cannot control what the national broadcaster puts to air.

A Department of Foreign Affairs and Trade (DFAT) spokesperson declined to discuss the meeting in detail, saying that it “does not comment on conversations with foreign governments”.

But the episode is another illustration of the way that Mr Sogavare’s government is becoming increasingly sensitive to criticism.

The flare-up over the Four Corners story comes as reporters in Solomon Islands warn that the Sogavare government is trying to stifle press freedom in the country.

The government has moved to replace the board of the publicly funded broadcaster SIBC and has stripped it of its status as a state-owned enterprise, accusing the organisation of stoking disunity.

But it insists the broadcaster will remain independent and that the government will not try to control what it puts to air.

Australians are currently granted a visa on arrival in Solomon Islands, and Australian journalists have been able to travel there to report ever since COVID border restrictions were eased earlier this year.

But Sogavare refused interviews with two ABC crews who travelled to Solomon Islands in recent months, including the Four Corners team.

He has also repeatedly lashed both local and international media outlets, accusing them of undermining national unity and distorting the truth.

And the ABC has been told that Solomon Islands may now seek to introduce new restrictions on overseas journalists, potentially making it more difficult for reporters who have aired stories critical of the government to enter the country.

Sogavare’s government has also been exploring the idea of setting up a new state-run newspaper, although it’s not clear how far advanced this plan is.

But the prospect has still fuelled unease and concern among Solomon Islands media outlets, which often rely quite heavily on government advertising for revenue.

If the government ran those advertisements in its own newspaper instead it could deliver a heavy blow to the finances of existing media organisations.

Senior Solomon Islands journalist Georgina Kekea told the ABC that rumours about a government-run newspaper had been circulating since last year.

“The government should focus on creating a conducive environment for the private media sector, rather than coming and competing with the private sector,” she said.

“We have had comments from [the government] saying that papers refuse to run press releases and most times their stories are in the middle pages. But what do they expect?! People read the paper front to back, I don’t see what the fuss is.”

She also said that the government may struggle to recruit the people it needed to establish and run a new publication.

“It’s hard work to start a newspaper. You need skilled people doing that job, particularly when you talk about graphics and layout and design,” she said.

“So how sustainable will it be? It’s just another waste of money.”

One Australian government source, speaking on the condition of anonymity, told the ABC that the space for media freedom in Solomon Islands looked to be “narrowing” and that Australian officials were watching developments very closely.

Separately, a DFAT spokesperson responded to questions about the developments with a broader statement about the importance of a free press.

“Australia’s view is long-standing and consistent – free and independent media is vital to building strong communities and ensuring democratic accountability worldwide,” they said.

Solomons PM could use Chinese police to stay in power, key...