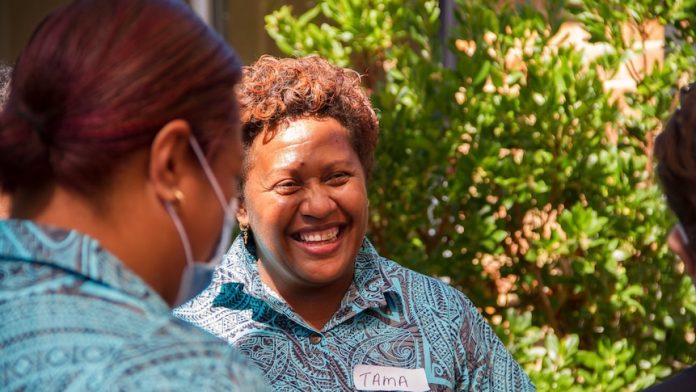 Australia is pinning its hopes on Pacific workers to help fill shortages across the economy — particularly in aged care — but industry says a history of poor conditions and sheer numbers mean that’s unlikely to make a significant dent in demand.

The federal government has expanded the Pacific Australian Labour Mobility Scheme (PALM) to include aged care, hospitality and tourism industries in a bid to address workforce shortfalls, but the outlook for the aged care sector remains particularly bleak.

It will be among a list of issues to be discussed at next month’s Jobs and Skills Summit in Canberra, convened by the government to bring union and business leaders together to address staffing issues, wages and enterprise bargaining, among other topics.

Australia needs to find an extra 35,000 aged care workers per year to fill growing skills shortages, according to a recent Committee for Economic Development of Australia report.

The report found 65,000 aged care employees were leaving the sector each year.

An Australian Nursing and Midwifery Federation (ANMF) survey earlier this year revealed that 20 per cent of workers intended to leave within a year.

In Western Australia’s south, six Fijian aged care workers have filled some of the vacant, much-needed positions caring for the elderly.

The workers were the first to arrive under the expanded PALM scheme.

“In the short term, it’s going to play a huge role and I think it’s the only way the sector is going to cope,” she said.

“If we posted a new ad, I wouldn’t be confident that we’d get any applications at all, as we’ve had ads running for care workers since October last year.”

“One of the unfortunate by-products of not being able to recruit adequate [numbers of] people is that we’ve blocked off some beds,” she said.

“We’ve actually got some of our Fiji workers living in those beds.

“If the wage case goes through, and aged care becomes a more desirable occupation for people, maybe we’ll see more people coming to the sector but, if not, we’re going to have to continue to rely on workers like this for the foreseeable future.”

ANMF federal secretary Annie Butler said overseas-trained workers had long formed a significant part of Australia’s care and nursing workforce and the expansion of the scheme could have a positive, yet limited impact.

“It’s not going to be enormous and it’s certainly not going to address the current critical workforce shortages that we have, but it could bring some positive benefits,” she said.

“At this stage, it’s not going to be large numbers and we’re obviously going to need more than just a reliance on the PALM scheme to address all of our workforce shortages.

“Immigration is not a silver bullet but it’s part of those wider solutions.

“[The number of overseas-trained workers] has dropped off over the last couple of years and it’s going to take a bit of time to build back.”

“We’re talking dozens rather than thousands of people [who] might be available,” he said.

“We need an opening up of visas, not only for Pacific Islanders, but [also] more broadly, so we can prioritise aged care workers.”

“I think it is good because the workers can put things they’ve learnt in place in their country, but there are also people who want to make a career out of it here. Is that in place?” Smith said.

“They’re told: ‘You’ll be treated the same as every Australian worker.’

“Every Australian worker can leave their employment and go and work for whoever they want to, ‘but not you guys’.”

“It’s just not shove the workers over here and say, ‘OK, problem solved’,” he said.

“I see a problem in the shifting though because, if you’ve got people on one shift all the time, you are going to burn them out.

“Accommodation has got to be a lot more sensitive, with two to a room, but not three, four.”

Butler said Australia’s history of mistreatment of people from South Pacific Islands could deter some people from choosing Australia as a place to work.

“Our concerns are that anyone coming from any other country — but particularly from our South Pacific neighbours — that they experience the same pay and conditions and that there is no room for exploitation,” she said.

“They need to not be isolated from the communities they engage with.”

Last week the federal government promised to fund a potential aged care worker pay increase in a submission to the Fair Work Commission.

The independent wages umpire is considering a case brought forward by the unions, calling for a 25-per-cent pay increase for 200,000 residential and home care workers.

“We need more staff in aged care and a pay rise is the start of ensuring workers are rewarded for the crucial roles they play,” she said.

“One of the main causes of the gender pay gap is low pay and poor conditions in care sectors like aged care, where the majority of workers are women.

“Increasing wages in aged care is essential to ensuring that men and women are paid equally.”

The matter has been before the Fair Work Commission since 2020, with government and unions to put their cases forward during hearings this month.

Seasonal workers arrive from Vanuatu to pick mangoes in Darwin

Half of Tonga’s tourism businesses ‘won’t return’ after tsunami, lockdown