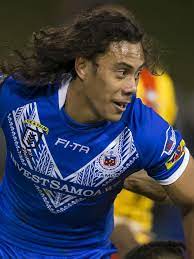 Luai joins his Panthers and Blues teammate Brian To’o in committing to Samoa, while Queensland and Raiders star Josh Papalii is expected to follow suit.

All three have previously played for Samoa but were in contention for Kangaroos selection.

“I am going to play for Samoa. It is who I am, and it is how I was bought up,” Luai told NRL.com.

“I know I live in Australia, but it is just a way of life for us. We are really connected to our Polynesian side as well.

“It’s how we grew up in the Samoan community and Samoan churches. It’s instilled in us. Hopefully we don’t get judged too badly for that.”

Samoa take on England in the opening match of the World Cup on 15 October.