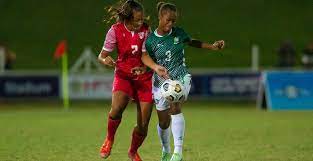 The Solomon Islands have reached the semi-finals of the OFC Women’s Nations Cup 2022 after grinding out a 1-0 win over Tahiti at the HFC Bank Stadium in Suva, Fiji.

Mary Maefiti’s moment of magic was all that separated the two nations as the Solomon Islands set up a semi-final clash with Fiji.

While yesterday’s quarter-finals were free-flowing offensive displays this was more a war of attrition, the wet weather in the Fijian capital making it difficult for both sides to produce the football they are capable of.

Tahiti had the better early chances in what was a largely uneventful opening period.

Kiani Wong stung the hands of Solomons goalie Corrina Rotoava while Hinavainui Malfatti slashed a great chance wide on her weaker right foot as Tahiti looked to gain the advantage.

But it took a moment of quality to break the deadlock with Maefiti the provider. The Solomon Islands midfielder danced away from her markers before clipping a shot from the edge of the box over the backtracking Tahiti goalkeeper Camille Andre to send the enthusiastic Solomons support into rapture.

The 28-year-old tried her luck from range again soon after, this time the ball flying harmlessly into Andre’s arms, before receiving a booking, along with Tahiti defender Raihei Tetauru, as tempers flared late in the first-half.

Maefiti tested Andre again early in the second-half while Rotoava got a crucial fingertip to Kohai Mai’s cross, denying a clear shot at goal for the waiting Tetia Mose at the back-post.

Tahiti were gifted the opportunity to level the scores in added time. An error from Edith Nari saw the ball land at the feet of Babou Tepea but she shanked her attempt wide.

Tahiti saw a last-minute penalty appeal turned away as the Solomon Islands’ resolute defence, cheered on by their raucous fans, held on to secure a first semi-final berth since 2010.

The result for Batram Suri’s side is all the more impressive considering their place as the tournament’s second-lowest ranked nation at 120 in the world when the competition began. They will now face host nation Fiji in the semi-finals on Wednesday, July 27, with Samoa and Papua New Guinea completing the final four.

Meanwhile, Tahiti exit the tournament with heads held high, having advanced from the group stage for the first time in their history.

“We have a very young team. A lot of those girls come from the U-19 and will be in the next competition for U-19.

“As we always say in Tahiti ‘we are working for the future’.

“The plan is for 10 years and we are in the middle, the fifth year, so we will continue what we are doing.”

“I can’t ask for more. The girls did very well for us. I am so glad and pleased and happy with ourselves.

“I knew they would come hard against us in the second-half. But I told them that if we don’t score the next one we have to protect that only one goal so that we can win the game.

“The defenders and everybody got behind the ball and they did well.”.