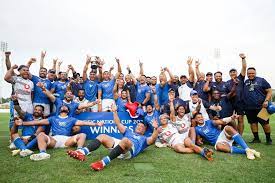 The final match of the Pacific Nations Cup had all the drama needed for the crowd who watched on from the hill of Churchill Park. Everything rested on this final game and, with the clock red, it wasn’t until the ball was finally kicked to touch by Samoa that the result was secure. This was a comeback for the ages.

Despite the hosts leading 17-3 at half-time, and looking in control for the first three-quarters of the match, Samoa overpowered their rivals at the set piece to confirm their first win against Fiji in Fiji 23-20. This is the fourth title for Samoa who become the second most successful team in the Pacific Nations Cup behind Fiji (5). In the first match of the day, Australia A won 39-22 against Tonga.

A comeback to end all comebacks

The first try for Fiji was enough to make the crowd roar as Albert Tuisue picked a fantastic line from a tap penalty to power through the Samoan defence and put his home side ahead in the first quarter.

Frank Lomani, the Fijian scrum half, was a force to be reckoned with as he took every opportunity to run with the ball in hand, tiring Samoa and creating space in the backfield. Fiji were in control for the first half and had a comfortable 14-point lead at the break.

“Whatever was said to Samoa at half-time, bottle it” a commentator said as the visitors came out in the second half looking like a more aligned unit. Less than two minutes into the second half, Seilala Lam, who came on to replace Ray Niuia, broke off the back of a line out to score his side’s first try and bring Samoa back into the match. The comeback was on.

The Samoan scrum struggled under the pressure from Manasa Saulo, who had a performance worthy of his 50th appearance for Fiji, but when both front rows changed later in the second half, the momentum switched and a collapsing scrum gave Samoa’s Rodney Iona the chance to close the gap to four points.

Minutes later, another collapsing scrum from Fiji and then an offside call against them gave Samoa a line out five metres from the try line. Samoa formed a rolling maul and Lam powered over for his second try of the match. Iona’s conversion confirmed Samoa’s three-point lead with ten minutes left on the clock.

In the final moments, Fiji gripped on to their final opportunity to create a try with their own attacking line out on the five-metre line. With seconds left on the clock, Samoa were called offside and with the advantage, Fiji chose to go for another line out to stretch this match’s drama long past the clock turning red. The throw overstretched the line out and landed in the hands of Samoa who kicked it to touch to close this year’s tournament in the most dramatic fashion. Final score: Fiji 20 – 23 Samoa

‘We will learn from our mistakes’

After the match, Fiji captain Waisea Nayacalevu said his side will build from today’s performance. “We’re sorely disappointed,” he said. “Congratulations to the Manu Samoa team for their efforts in the second half. We have to build from that, and from our mistakes. We have talked about it all week, that they are going to come hard, it’s going to be physical. But we let ourselves down and that cost us the game today.”

‘In the past we would have lost those games’

Manu Samoa captain Michael Alaalatoa said the result was part of the “winning culture” Samoa are building. “It took us 80 minutes to get there, we know that the Fijians are world class and they showed that in the first half,” he said.

“They put a lot of pressure on our set piece especially, and especially at scrum time but I’m so proud of our boys to hang deep. In the past, we would have lost those games but we are starting to build a winning culture. I’m just so proud of the boys that they were able to dig deep there in the end.”

Earlier on, Australia A secured the bonus-point win they needed against Tonga to move to 12 points in the table with two wins from three, but it was not enough to win the cup.

Australia A headed into their match at Churchill Park knowing that nothing short of a bonus-point win against Tonga, and Fiji beating Samoa, would be enough to secure a Pacific Nations Cup victory.

Yet it had seemed a world away when less than two minutes into the match Tonga scored from a strong rolling maul. Sam Moli crossed over from the back of the maul to get the first score of the match for Tonga, but it didn’t take long for Australia A to react and within minutes captain Ryan Lonergan had scored a penalty and his side soon overtook Tonga on the scoresheet with a wonderful try. With the penalty advantage, Jock Cambell drew in the fragmented Tongan defence and shipped the ball out wide to the left wing, where Filipo Daugunu gathered and leaped over the line to put Australia A ahead for the first time in the match.

In 29 degree heat, Australia A bookended the half-time break with two tries to put them in a comfortable lead. Before the break, No 8 Langi Gleeson, the star of this match, collected a quick ball from scrum-half Lonergan to cross the whitewash and take his side into the changing room 16-8 ahead. After the break, Hamish Stewart was the beneficiary of a Tongan mistake as they let the ball bounce awkwardly from a high kick, which Australia A took advantage of. Daugunu gained control of the ball and played it through the hands for Stewart to bundle over in between the posts.

At this moment the game felt beyond the grasp of an exacerbated Tonga but they reverted back to the rolling maul that has been their vehicle for so many of their opportunities this tournament. From a line out, Moli was yet again unstoppable in the maul and scored his second try of the match.

Before the 60-minute mark Australia A had secured the bonus point they needed, and their fate was firmly in the hands of Fiji. As the sides scrummaged in the 59th minute, Gleeson took advantage of the lack of blindside cover and drew in three defenders before offloading to Daugunu who, in acres of space, was able to run through for his second try of the match and secure the full points available.

Tonga had opportunities in the second half that were almost always lost to handling errors and mistakes. Their final try, in the 68th minute, was the result of another rolling maul, with Jay Fonokalafi getting his name in on the scoreboard. Momentum was building for the side when Aisea Halo, the replacement half back, was sent to the sin bin for a deliberate knock on. Almost instantly Australia capitalised on their one-man advantage and James Tuttle zipped through the broken Tongan defence to score under the posts. Final score: Tonga 22 – 39 Australia A.

Tonga look ahead to next week

Tonga will take the experience gain from the tournament for their decisive fixture for Rugby World Cup 2023 qualification against Hong Kong on 23 July. The two sides are meeting in a one-match play-off in Australia’s Sunshine Coast stadium to decide who qualifies as Asia/Pacific 1 and joins South Africa, Ireland, Scotland and Europe 2 in Rugby World Cup 2023’s Pool B.

For Australia A, they had done all they could, but in the end, it would not be enough to secure the cup.

After the match, Lonergan said he was pleased with how his team had performed at the tournament. “We’re pretty proud,” he said. “We were disappointed with our first game, but after that the boys dug in and we’re really proud of the effort and how we’ve come together over the last few weeks.”

The Australia A captain then faced the wait to see if their win would be enough to win the cup. His reaction was simple: “Go Fiji!”.