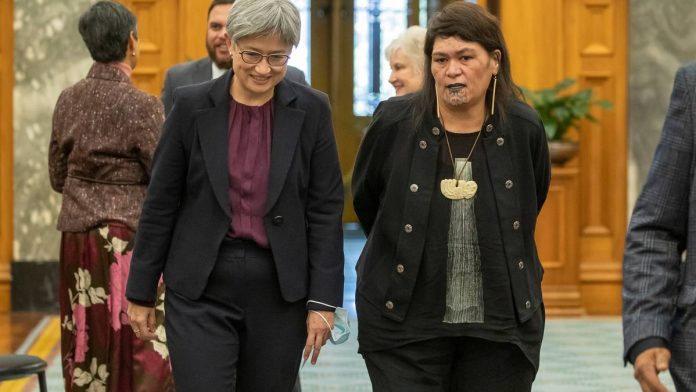 Australian Foreign Affairs Minister Penny Wong said Australia has work to do “as a member of the Pacific family”.

Wong met with New Zealand’s Foreign Affairs Minister Nanaia Mahuta in Wellington on Thursday, as the pair reiterated the closeness of the trans-Tasman relationship.

It comes a week after their Prime Ministers met and Jacinda Ardern and Anthony Albanese promised to take the trans-Tasman relationship “to a new level”.

Wong promised Australia and New Zealand would work together in the space of issues in the Pacific.

“I think Australia has more to do as a member of the Pacific family,” Wong said.

“”We do have some ground to make up.”

She made mention of the importance of tackling climate change, and spoke about Australia’s new Government’s change of approach. Both her and Mahuta talked about climate change being a critical challenge in the Pacific.

Mahuta said they both recognised “the Pacific is a contested space and by working together, it will be important to ensure we work along side the Pacific”.

“They define their priorities but also the way in which we partner with the Pacific with their biggest issues, like climate change, like economic resilience”.

Australia’s 501 policy implementation, which sees people deported from Australia to New Zealand despite having with little-to-no ties, was brought up at Mahuta and Wong’s media conference.

Wong said the “501 issue has been discussed between our PMs and I think Prime Minister Albanese has made some statements around that, we understand the concerns have been raised and we will take those into consideration”.

The last line of a joint press release between the ministers said they discussed the situation of New Zealanders living and working in Australia.