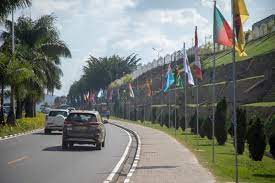 Excitement is high in the capital Kigali as the Commonwealth Heads of Government Meeting (CHOGM) 2022 draws closer, with just a few days left until 20 June, when the world descends on Rwanda.

Neat roads, well-kept lawns and palm trees lining the streets, lighting and décor, flags and glittering venues all define the level of every preparedness. Every sign in the air shows that the moment Rwanda has been waiting for, for more than two years, is finally here.

The two-day biennial meeting held under the theme “Human Rights for All at the Heart of Recovery Efforts During and After COVID-19” was hosted by the National Human Rights Commission of Rwanda.

Rwanda is the incoming chair of the Commonwealth Forum for Human Rights Institutions. The event has set the tempo of what is to expect in the coming days as over 5, 000 delegates jet in for different CHOGM-related events.

CHOGM 2022 which takes place 20-25 June will bring together leaders from across the globe to reaffirm their common values and agree actions and policies to improve the lives of citizens in the 54 member states group under the Commonwealth.

The official opening of CHOGM takes place on Friday 24 June and is followed by the main high-level meetings of Heads on Friday to Saturday 25 June. The meetings will be preceded by four Forums, ministerial meetings, side events and other activities.

For over two years, Rwanda has been ready to host the summit CHOGM was due to take place in June 2020 but was postponed twice due to the COVID-19 pandemic.

Speaking during a space session to discuss the readiness of the capital Kigali, the City Mayor Pudence Rubingisa said that Kigali is ready to welcome delegates attending CHOGM and other side events.

“We are more than ready. It is visible on the roads, everywhere you can sense it in the air that we are ready. We’ve been preparing for the past two years and the time has come now. Even the people are ready,” Mayor Rubingisa said.

Rubingisa said that final touches are being done on the remaining roads and infrastructure aimed at making CHOGM smooth and ensure that life goes on for the citizens.

The City Mayor called on city dwellers to tap into the revenue and opportunity CHOGM is bringing, including selling goods and services which the visitors will require.

“We have planned a number of activities including expositions, music shows and other entertainment activities to ensure that delegates coming for CHOGM and other side events have enough fun activities to enjoy, to have a memorable time in Rwanda,”

“We encourage the business community to remain active during this period and benefit from CHOGM,” Rubingisa said, adding that CHOGM will not be a lockdown for non-participants and citizens in general.
The Chief Executive of Rwanda Development Board (RDB), Clare Akamanzi, told KT Press that the hospitality sector is equally ready to welcome delegates coming for CHOGM.

In April, President Paul Kagame challenged members of the private sector to improve their facilities and services in readiness for CHOGM. The Head of State said that the level of service delivery was still wanting and it gives the country a bad name.

Akamanzi said that a lot has been done over the past months to ensure that there is an improvement in services and that the hospitality sector is not overwhelmed by the numbers.

“We have been preparing ourselves in the hospitality sector to receive CHOGM delegates and we can say confidently that we are ready,”

“To get here we had to do a number of things because we knew that the hospitality sector needed to be strengthened,” Akamanzi said.

Akamanzi said that they placed supervisors in all the key hotels to help supervise the day-to-day work of the people there. In some hotels she says they put as many as six supervisors and in others, two supervisors.

The government also hired Vatel, a renowned hospitality company to train and hire all the casual labour needed to serve during CHOGM. Akamanzi said that by the end of the exercise, between 700 and 1,000 people will have been trained and made ready for CHOGM by Vatel.

RDB, which in recent months has cracked down on poor service delivery in hotels, has instructed all hotels, especially the ones in the three to five-star categories, to redo training and refresher courses for all their staff to make sure everything goes well.

Akamanzi said that together with the Ministry of Health, they have inspected the food safety storage capacity in all the key hotels, to make sure that they are ready.

“We also asked each of the hotels that have chains, like Marriott or Serena Hotels, to bring their best staff from the other facilities in the region to come and help because they will be stretched during the CHOGM week,”

“Many of them are bringing people to help, some of them as many as 30 to 40 people -an example is Serena. We also have a good number coming from Radisson, Four Seasons etc,” Akamanzi said.

The RDB CEO said that other measures they’ve put in place include asking hotels to work with their suppliers, especially of cereals, meat and wines, to make sure that they stock up for that week so that there are no shortages of food.

“We are going to have very high numbers of people during CHOGM compared to what we are used to especially historically but also post pandemic,”

Rwanda National Police (RNP) on Wednesday released the CHOGM traffic advisory roadmap, which shows which roads will be restricted and alternative routes people can use to avoid being inconvenienced.

CP John Bosco Kabera, RNP Spokesperson said that roads will not be completely closed off, except in moments when high-level delegates are using them but encouraged people to consider using alternative routes.

“What we are saying is that if you use alternative routes, you will be less inconvenienced and you will make it easy for delegates to move from one place to another,”

“Police officers will be on the roads to guide you but it is in the interest of all of us to plan out our movements to ensure that CHOGM and other meetings happening around that time go smoothly,” Kabera said, assuring people that security will be guaranteed.

CHOGM 2022 is expected to attract high profile guests, led by the Prince of Wales and The Duchess of Cornwall. Prince Charles, as he is known, will represent Queen Elizabeth II, the head of the Commonwealth.

“My wife and I much look forward to meeting Commonwealth leaders and, for the first time, being able to visit Rwanda,” Prince Charles said in a press release ahead of the visit, revealing the itinerary and different activities he will participate in.

The government is yet to release the list of all attending heads of state but sources say more than 40 heads of government will be in attendance.