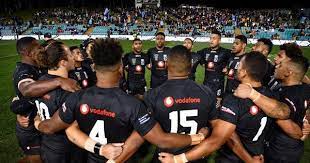 The pair are among 15 NRL players in a 30-man squad named for the June 25 Test at Sydney’s Campbelltown Stadium, which will headline a double-header also featuring Samoa and the Cook Islands.

Masikau was a member of the Fiji team that beat New Zealand in the final at last year’s Tokyo Games.

The Bati will be led by Naiqama, who won three consecutive Super League premierships with St Helens before returning to the NRL this season and has played 19 Tests for Fiji.

Naiqama was first appointed captain of the Bati in 2016 and led the nation to the 2017 World Cup semi-finals.

Kikau, who was a key member of Penrith’s premiership winning team last season and is arguably the NRL’s form second-rower, has been appointed vice-captain.

NRL stars not included in the team for the Pacific Test but who may play for Fiji at the end of season World Cup in England include Panthers hooker Api Koroisau, Dragons second-rower Tariq Sims, Parramatta Eels prop Reagan Campbell Gillard and centre Waqa Blake, Newcastle Knights front-rowers Jacobi and Daniel Saifiti and Warriors back Marcelo Montoya.

Players based in the northern hemisphere, including Korbin Sims, Kane Evans and King Vuniyayawa, were not considered.

The squad, which will go into camp at St Marys on 20 June, includes four players from the Fiji domestic competition.

May scores four as Samoa beat France 62-4 to advance

Lemuelu in for Brown as Samoa name squad for World Cup...