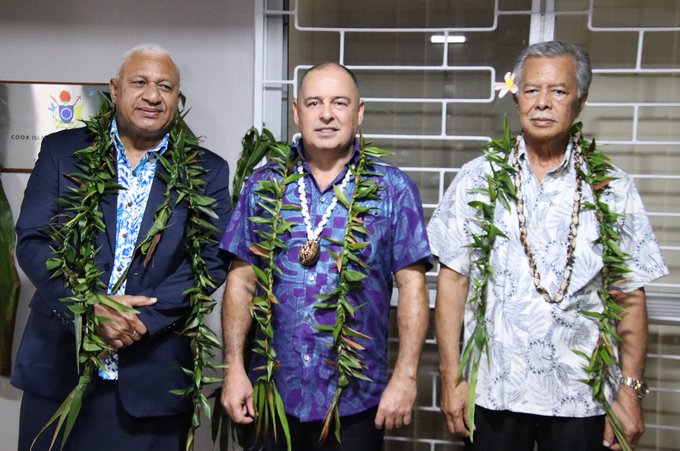 Several top Pacific Island leaders will today sit down for an extraordinary meeting that they hope will resolve the leadership crisis threatening to split the region’s peak diplomatic body.

The Australian government has played a crucial role in helping to facilitate the face-to-face gathering about the future of the Pacific Islands Forum (PIF), flying three Micronesian leaders to Suva for the meeting orchestrated by Fiji’s Prime Minister, Frank Bainimarama.

The Forum has been on the verge of breaking apart ever since the current Secretary-General, Henry Puna, won a bitter contest to take the top job early last year.

Micronesian countries accused the other PIF members of ditching a “gentleman’s agreement” over the leadership role and began the process of withdrawing from the forum.

They suspended that withdrawal in February this year, saying PIF had promised to propose “substantive reforms” to its structure while Puna had signalled he was willing to break the impasse by standing aside.

However, that only sparked a fresh round of recriminations, with some Polynesian leaders saying they had not been consulted about Puna quitting the top job.

The saga took yet another twist in March when the Marshall Islands President, David Kabua, appealed for reconciliation and urged his fellow Micronesian leaders to seek a compromise.

Today, three of the Micronesian leaders threatening to split from PIF — Palau President Surangel Whipps Jnr, Nauru President Lionel Aingimea, and the President of Federated States of Micronesia, David Panuelo — will sit down with Bainimarama, who is currently the forum’s chair.

The ABC has been told the parties hope to strike an agreement that will resolve the leadership question, reform the organisation and allow the forum to stay whole.

Several other Pacific leaders — including the prime ministers of Cook Islands, Samoa and Papua New Guinea — will also attend the meeting.

“We are strongly of the view that a united Pacific is a stronger Pacific. And the Pacific Islands Forum is where the Pacific family — in all its strength and diversity — gathers to speak with a unified voice,” he told the ABC’s Pacific Beat programme.

“And, in that spirit, we’ve been supporting Fiji as chair of the forum, in leading talks with leaders from Micronesia and other forum members, with a goal of keeping our family together.”

The ABC has been told Micronesian countries remain determined to push for substantive reform of the organisation, and of the process used to select the PIF secretary-general.

However, they are also intent on maintaining Pacific unity, if possible, particularly given the intensifying geopolitical competition in the Pacific.

It is not clear whether the leaders will continue to insist on Puna’s resignation as part of any agreement.

The ABC has previously been told that Puna may be offered an alternative position in the region if he steps down as secretary-general.

Conroy wouldn’t speculate on whether the Secretary-General would quit but, he said, Australia was “open to supporting outcomes that attract consensus amongst all forum members”.

“We expect that landing a deal will require clear communications and a willingness from all forum members to compromise in a Pacific way,” Conroy said.

Dr George Carter — a Pacific geopolitics expert and head of the Pacific Institute at the Australian National University — said it was important for Pacific leaders to meet face-to-face, to discuss the forum’s future before the PIF leaders’ meeting, which is likely to be held next month.

“It’s important that this question is addressed … before the leaders’ meeting. The issue of membership should always be done separately,” Dr Carter said.

“You do not want to have an official agenda that’s left wanting because it’s uncertain about some of these issues.”

He also said a visit by Australian Foreign Affairs Minister Penny Wong to the Pacific Islands Forum last month sent a message about Australia’s commitment to the regional body.

“It reaffirmed in that visit … that Australia values and wants to continue in that space of regionalism,” Dr Carter said.

There has been an intense focus on the intensifying contest for influence in the Pacific after the marathon, eight-nation tour by Chinese Foreign Minister Wang Yi.

China failed to secure a regional agreement with 10 Pacific Island nations during Wang’s visit, but Beijing landed several bilateral agreements with a host of countries in the region.

The project lead at the Griffith Asia Institute’s Pacific Hub, Tess Newton Cain, said the PIF leadership dispute had been “a journey of twists and turns”.

“It will be a success for the PIF chair, Prime Minister Bainimarama, if a suitable arrangement can be arrived at, in order for this to be resolved ahead of the leaders’ meeting,” she said.

“I expect that the events of the last week or so — and, especially, the effects of the attempt by China to get a multilateral agreement in place — will be featuring highly in people’s thinking and deliberations.”

Meanwhile, Wang sounded a conciliatory note when asked about Australia’s unease about his Pacific trip, declaring that China was not interested in extending its influence in the region.

“China respects all relations that those island countries established with others and respects their traditional links between Australia and New Zealand,” he told Chinese state media.

The foreign minister also suggested that China could deepen cooperation with Australia and New Zealand throughout the Pacific in order to “leverage our respective strengths and form greater synergy”.

“China will continue to adopt an open attitude and carry out more trilateral or quadrilateral cooperation with Australia and New Zealand in the South Pacific region, according to the wishes of Pacific Island countries,” he said.