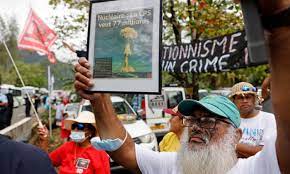 Some Pacific island nations have been left walking a geopolitical tightrope in their response to the war in Ukraine, as they try to balance regional alliances with both the west and China and Russia.

Comments by Russian president Vladimir Putin, which many have interpreted as thinly veiled threats about the potential use of nuclear weapons have also touched a nerve in a region long affected by the catastrophic effects of nuclear weapons testing by the U.S, France and Britain.

Pacific leaders have broadly lambasted the Russian assault, with the Federated States of Micronesia even going so far as to sever diplomatic ties with Russia the day after the invasion was launched. Micronesia’s president David Panuelo accused Moscow of engaging in “numerous war crimes,” writing, “There is no nuance in Russia’s behaviour; they are choosing to act as villains.”

In Fiji, where the acceptance of donated Russian arms and military training in 2016 raised concerns, the high court ruled last month that the government in Suva was within its rights to prevent a super yacht called Amadea, from leaving the Fijian port where it is docked while a U.S seizure application is determined. The U.S alleges the yacht is owned by Russian oligarch Suleiman Kerimov, who is the subject of U.S and European economic sanctions. Defence lawyers dispute that.

Ten Pacific island nations were also among 93 countries that voted to suspend Russia from the UN Human Rights Council last month. Two Pacific states, however, did not. Vanuatu abstained and Solomon Islands did not vote.

Mihai Sora, a research fellow with the Lowy Institute and former Australian diplomat, noted that Melanesian countries have tried to develop relations with both western powers as well as China and Russia, seeking to avoid appearing too close to either side.

“Solomon Islands and Vanuatu stand out as two Pacific countries that have been actively pursuing closer relations with China at the political level in recent years,” Sora said.

Beijing has abstained on UN security council resolutions condemning the war and has also echoed, and amplified, Kremlin talking points in official media outlets, blaming Nato for the conflict.

This month Solomon Islands signed a security pact with China which could allow for Chinese security personnel and warships to enter the country to protect Chinese interests. In recent years, Sora said, analysts have also seen Vanuatu as a potential host for a Chinese military base, despite denials by both nations.

Vanuatu, Sora added, has also maintained closer ties to Russia relative to other Pacific nations. In 2011, it briefly established diplomatic relations with Abkhazia, a breakaway region in the Caucasus nation of Georgia, aligning itself with Russian interests.

“By abstaining on the human rights council vote, Solomon Islands and Vanuatu may be seeking to have it both ways,” Sora said, suggesting the two countries don’t want to entirely contradict China or Russia, nor do they want to run counter to Australia, New Zealand, and the rest of the Pacific.

Neither the UN missions for Vanuatu or Solomon Islands responded to requests for comment.

In the early days of the war, Putin put Russia’s nuclear forces on high alert and as his offensive shifts to Ukraine’s eastern Donbas region, he has overseen the testing of a Sarmat intercontinental ballistic missile, describing it as “food for thought for those who … try to threaten our country”.

Casten Nemra, minister of foreign affairs in the Republic of the Marshall Islands (RMI), where the U.S conducted 67 nuclear tests in the 1940s and 50s, said Putin’s references to nuclear weapons were “utterly irresponsible and sheer madness”.

“Nuclear weapons bring nothing but total destruction … even many decades later, we continue to this day [to] experience the negative effects on our environment, health, and communities.”

The country also co-founded the Group of Friends of Accountability with Ukraine and four other UN member states aimed at “ensuring accountability for international crimes committed following the Russian invasion of Ukraine”.

In French Polynesia, where France carried out 193 nuclear tests between 1966 and 1996, Putin’s comments are also a reminder of the true cost of nuclear weapons and colonial conquest.

Vehia Wheeler, a Tahiti-based environmental and human rights activist, said that it was absurd that there was still talk of the use of nuclear weapons in 2022 “after all the work that people have been doing and have been working towards, reparations, preventing [nuclear weapons] from being used, that this is even an option.”

However, she said the UN vote to suspend Russia from the Human Rights Council smacked of hypocrisy.

“I think that’s really interesting that the UN will vote against Russia, kicking them out of the Human Rights Council when obviously the U.S and France have been horrendous human rights violators considering the fact that they’ve already conducted nuclear tests on us in the Pacific for years,” Wheeler said.