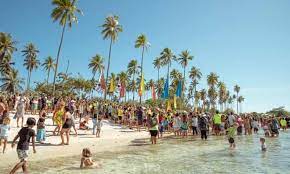 The gathering was a traditional cultural ceremony called a tahei, which saw people tie braided ti leaf cords together in a symbol of peace. The purpose was to raise awareness of the growing number of developments by a number of different groups on the island, which includes plans for two new hotels, plus more than 300 villas, homes and bungalows, catering to high-end visitors.

Temae is one of just three beaches accessible to the public on the entire island, the rest are privately owned or attached to resorts and inaccessible to locals.

But some locals fear Temae may soon to be lost to the public too. Last year, 53 acres of land at Temae, including the waterfront, was purchased for an estimated 4bn Pacific Francs, (US$36m). The land was bought by Wane group, a major player in the French Polynesian economy, running hotels and owning the country’s largest supermarket chains.

They also own the Sofitel Resort, near Temae. No announcement has been made about plans for the land but some fear that the recently purchased beachfront may be used to expand the activities of the resort. Wane group did not respond to requests for comment.

In a television interview, a spokesperson for Wane group reassured the population that Wane group was working for economic development in harmony with the community and the natural environment.

“Part of the beach will probably remain open to the public,” she said in the interview, adding: “Mo’orea has a unique environment, and this environment will be respected.”

The Keep Moorea Wild movement, which organised the tahei, and the Temae Residents association would like to see the land at Temae used in a way that benefits locals, such as building a public park in the area.

Many locals are concerned that the number of new developments by different groups across the island privatise huge areas of land, could negatively impact the environment and contribute to real estate speculation. Others argue that the developments bring much-needed jobs and boost economic growth.

“Growing up in Mo’orea, as a kid I used to think wow, this place is beautiful, it’s magic. But all of these places where I used to go play were getting destroyed to build parking lots and big homes,” said Temoana Poole, a photographer and one of the founders of Keep Mo’orea Wild.

He started the campaign group in response to extensive high-end development. Their goal is to preserve Mo’orea’s natural environment for future generations, as well as to promote sustainable, indigenous-centred development.

The movement already pitched one project to the local government for funding – a centre focused on connecting local people with tourists through culture and nature-based sports – however they claim they never received a response from government officials.

“Polynesia is so special and if it just becomes another concrete jungle, another city then it will lose its mana (power/spirit), it’ll lose what makes it special – the culture, the people, everything,” says Poole.

The influx of property developers in Mo’orea has also contributed to rising housing prices and real estate speculation has become a mounting issue. One hectare of land at Temae now sells for upwards of US$250,000, a price that most locals cannot afford. The land is, however, being snapped up by foreign investors who buy land to build holiday houses, then market them as Airbnbs. Others are creating subdivisions, homes and villas for high-end visitors.

“Every family living here wants to be able to afford to live on the island. This is where we were born and raised. Where are we supposed to move if we can’t live here?” said Mo’orea resident and tour operator Heimata Hall. “This is about preserving who we are, preserving our culture, preserving our people.”

However, supporters of high-end developments argue that they boost the economy, attract more tourists and provide locals with employment.

Tourism is French Polynesia’s number one export and represents 12% of GDP. Mo’orea is the second most visited island in French Polynesia, but it lags behind both Bora Bora and Tahiti in terms of tourist accommodations.

According to the Ministry of Tourism and Labour, Mo’orea’s hotel accommodation capacity sits at just over 1,000 beds, compared to Tahiti and Bora Bora which can both accommodate close to double that figure.

A new hotel would make it possible for more tourists to visit the island and provide up to 800 new jobs, says Hironui Johnston, a government official at the Ministry of Tourism and Labour, an important contribution considering the unemployment rate in French Polynesia is 12.8%, according to the French Polynesian Institute of Statistics.

“This is like an old mindset that we need development, we need a hotel, and that doesn’t work anymore,” said Poole. “What do the locals get? Well they get to be maids, they get to be bartenders, you know, they get to clean the garden, and they get to just survive in a minimum wage job.”

He said many of these kinds of jobs are “jobs to survive in society not to thrive.”

Johnston acknowledges that the developments can have an impact on the environment but says that it is in the interests of developers to preserve natural beauty.

“Even if we think economically or in terms of finances, it is in the interest of [developers] to preserve the environment because that is the selling point for Tahiti.”

In September 2021, a clause in the law involving Mo’orea’s maritime space management plan was changed potentially allowing overwater bungalows on the lagoon at Temae, an area that was previously under environmental protection.

Ronald Teariki, the mayor of Teavaro, the district where Temae is located, said that over 200 meetings were held across the island with residents regarding changes to the laws, but that the change that would allow overwater bungalows was made at the last minute at the federal level. He has since participated in meetings to address local concerns.

“These promoters can’t do whatever they want, they must follow Mo’orea’s Maritime space management laws,” he said…. PACNEWS