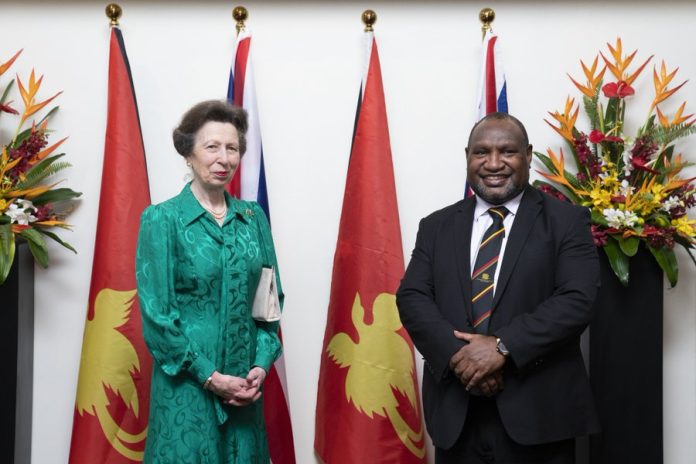 Princess Anne has landed in Papua New Guinea as she continues her southern hemisphere tour to mark the Queen’s Platinum Jubilee.

The Princess Royal and her husband, Vice Admiral Sir Timothy Laurence, landed in Port Moresby on Monday and were greeted on the tarmac of Jacksons International Airport by Prime Minister James Marape.

Princess Anne was presented with a garland of flowers before she inspected a guard of honour.

It follows a weekend of engagements in Australia, including opening the 200th Sydney Royal Easter Show on Saturday.

On the first two days of the trip, the princess and her husband are scheduled to tour the country, visiting Caritas Technical Secondary School, St John Ambulance, the Bomana War Cemetery, Adventure Park Papua New Guinea and the National Museum and Art Gallery.

She will also open a Women’s Resource Centre at Vabukori Village and the National Cardiac Diagnostic Centre at Port Moresby General Hospital, and will meet elders and community leaders at Hanuabada Village.

Anne will conclude the two-day tour with a dinner with Marape and representatives from the charity sector and business groups.

It comes after the Queen and the royal family on Saturday marked the first anniversary of the Duke of Edinburgh’s death.

The Prince of Wales and the Duchess of Cornwall are set to make an official visit to Canada next month as part of the Platinum Jubilee celebrations.

Clarence House said Charles and Camilla will meet communities throughout Newfoundland and Labrador, Canada’s Capital Region and the Northwest Territories, and more details will be released in due course.

The prince has visited Canada 18 times, while Camilla has been four times.

They last toured the country together in 2017 when they met Prime Minister Justin Trudeau and marked the 150th anniversary of the Canadian Confederation.