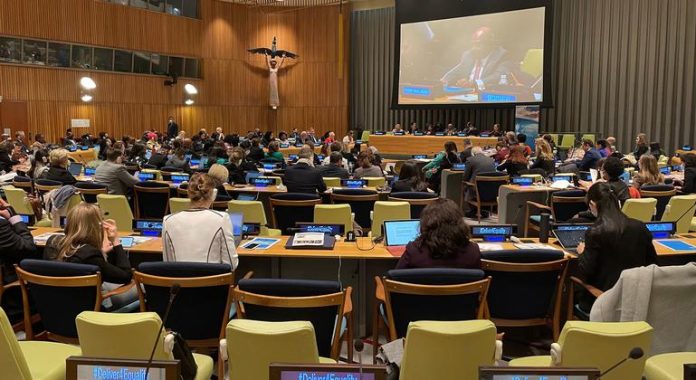 Top UN officials on Tuesday gathered with government and civil society representatives to draw attention to the scourge of violence against women worldwide who are involved in politics, which is increasingly seeing women parliamentarians, human rights defenders and electoral observers silenced, and intimidated.

“As a former Parliamentarian, and a lifelong politician, violence against women in politics is an issue near to my heart. It is a moral and ethical failure on us as a society,” said the President of the UN General Assembly, Abdulla Shahid, whose office organised the event on the sidelines of the Commission on the Status of Women (CSW).

The event brought together Vice-Presidents, Government Ministers and senior officials from more than 20 UN Member States – some of whom spoke from personal experience about the barriers to running for office as a woman candidate.

Deputy Secretary-General Amina Mohammed said that violence against women in politics is a violation of human rights that aims to undermine governance.

“The aim of some groups is silencing women and robbing them of agency,” she said via video message.

The UN deputy chief noted that concrete action is needed to address violence against women and girls. Proposals for such national plans are part of the Secretary-General’s Our Common Agenda report, which was the recent focus of five thematic consultations at the General Assembly.

Violence against women active in political life is a form of gender-based violence that manifests physically, psychologically and sexually, both in-person and online.

The head of UN Women, Sima Sami Bahous, said that “violence silences women, renders them invisible, pushes them from public space.” This in turn directly hinders progress on the 2030 Sustainable Development Agenda, which aims to lift people out of poverty and create a more equal, sustainable world.

Bahous pointed to hate speech as one of the drivers used to discredit women in the public sphere, and noted that such violence is particularly difficult on young women, who may respond by simply shunning political activism altogether.

“Only when women are safe from violence and there is accountability, only then, can we make progress.”

Women today occupy 26.1 percent of parliamentary seats globally, compared to 13.1 per cent in 2000, according to the Inter Parliamentary Union (IPU).

The share of women parliamentary speakers, in charge of managing day to day business in legislatures, has also increased from 8.3 percent in 2005 to 24.7 percent in 2021.

However, as participation of women in politics has increased, so has the violence against them. Data shows that this is due to more women speaking out about the scourge, but also as a result of insufficient countermeasures to address violence.

The Special Rapporteur also discussed the need to collect data as a tool to asses the level of gender-based violence against women and girls.

Taiwan leads the world in advancing gender equality in Asia