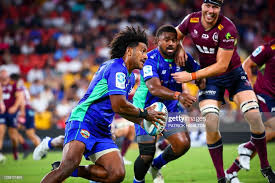 -The Queensland Reds have avoided one of the great Super Rugby boilovers, surviving an incredible Fijian Drua comeback to win 33-28.

The Reds led 28-9 with 18 minutes to play after scoring their fourth unanswered try, before three runaway five-pointers against a tiring defence turned Saturday’s game on its head.

Five eighth Teti Tela had a chance to put the newcomers ahead of the reigning domestic champions with 10 minutes to play, but hit the post with his conversion.

Instead the Reds, who had substituted a bulk of their biggest names, found a saviour in Seru Uru.

The frenetic finish came after the game was brought to a standstill ahead of halftime when three players – two of them Reds front rowers – were yellow carded at the same stoppage but for three separate incidents inside 30 seconds of play.

The No.6 scored in the corner to put the Reds ahead again and then stole a lineout on their own tryline after the siren as the Drua pressed for a match-winner.

“How good for Fijian rugby and footy … it was bizarre, hectic end-to-end and there was actually some really good rugby,” Reds coach Brad Thorn said.

“That first half took 57 minutes in a 40-minute game, those three yellows, sort of bizarre.

“A lot of good footy played but from our end not executing the final parts of it and Fiji jumping on errors almost like a New Zealand-style where a turnover costs you a try.”

The match started in top gear with Jordan Petaia making the most of his first crack in the Reds No.15 jersey, bursting down the right flank to score.

Harry Wilson bumped over for one too before an Uru try was reversed due to a forward pass in a brilliant lead-up.

But just like that, the wind went out of the game’s sails when referee Jordan Way halted play to look at three separate incidents that all resulted in yellow cards despite being overlooked as penalties at the time.

The Drua’s Samuela Tawake then joined the Reds duo on the sideline after lifting Uru in the ruck.

Suddenly 13 on 14, the Drua pressed against a reshuffled Reds pack but were held up over the line by a Wilson tackle.

Queensland attacked despite their numerical disadvantage, a spilt pass ruining another brilliant long-range effort as they went to the break up 15-6.

They pushed out to a seemingly comfortable lead when a cramping Nasser hobbled over for his second try, before Onisi Ratave, Joseva Tamani and Vinaya Habosi all crossed for the Drua to shock the Reds.

Debutant captain Fraser McReight steadied his side though, the Reds marching up-field to score then hold out the Drua, who upset Melbourne for a maiden win last weekend.

“Anything could have happened there (at 28-9) and we fought our way back into the game,” Drua coach Mick Byrne said.

“Inside our own rooms we believe we should be here.

“But we’ve just got to put out performances on the field will be how other people will start judging whether we do or not,” he said.