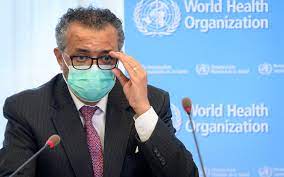 Almost 500 million people have been infected with the coronavirus since March 2020 and new variants are still a threat.

This Friday marks two years since the World Health Organisation (WHO) characterised the global spread of COVID-19 as a pandemic.

The UN health agency’s assessment was made six weeks after the virus was declared a global health emergency when there were fewer than 100 cases and no deaths outside China. Two years later, more than 6 million people have died.

“Although reported cases and deaths are declining globally, and several countries have lifted restrictions, the pandemic is far from over – and it will not be over anywhere until it’s over everywhere”, said WHO Director Tedros Adhanom Gebreyesus on Wednesday.

Speaking to journalists in Geneva, Dr Tedros reminded the world that many countries in Asia and the Pacific are currently facing surges of cases and deaths.

“The virus continues to evolve, and we continue to face major obstacles in distributing vaccines, tests and treatments everywhere they are needed”, he said.

The UN Secretary-General issued a statement on Wednesday supporting the WHO chief’s assessment, that it would be ‘a grave mistake’ to think the virus was now in the rear-view mirror.

In a statement published on Wednesday, António Guterres reiterated that the distribution of vaccines remains “scandalously unequal”.

“Manufacturers are producing 1.5 billion doses per month, but nearly three billion people are still waiting for their first shot”, he highlighted.

“This is a moral indictment of our world. It is also a recipe for more variants, more lockdowns and more sorrow and sacrifice in every country. Our world cannot afford a two-tier recovery from COVID-19”, he said.

Guterres added that despite the numerous other global crises, the world must reach the goal of vaccinating 70 per cent of people in all countries by the middle of this year.

“Science and solidarity have proven to be an unbeatable combination. We must re-dedicate ourselves to ending this pandemic for all people and all countries, and closing this sad chapter in humanity’s history, once and for all”, he emphasised.

The WHO’s chief also expressed his concern over the ‘drastic reduction’ of testing in several countries.

“This inhibits our ability to see where the virus is, how it’s spreading and how it’s evolving”, he warned

Meanwhile, COVID-19 Technical lead, Maria Van Kerkhove, informed that the agency is aware of a ‘recombinant strain’ in Europe.

“It’s a combination of Delta AY.4 and Omicron BA.1 It has been detected in France, Netherlands and Denmark but there are very low levels of this detection”, she said, also emphasising the importance of testing and sequencing all over the world.

Dr Van Kerkhove explained that the recombinant was expected given the high circulation of both Omicron and Delta.

“With the emergence of Omicron, in some countries, the wave of Delta had already passed so circulation was at a low level, but in other countries, in Europe for example, Delta was still circulating on a high level when Omicron emerged”, she detailed.

The expert highlighted that so far, scientists haven’t seen any change in the severity of COVID-19 with this strain, but that studies are still underway.

“Unfortunately, we do expect to see recombinants because this is what viruses do, they change over time. We are seeing intense levels or circulation; we see this virus impacts animals with the possibility of affecting humans again”, she warned.

Dr Van Kerkhove called on countries to reinforce their surveillance and sequencing systems instead of “taking them apart to move on to the next challenge”. She also reiterated her call for the use of a layered approach to public health tools.

“The pandemic is far from over, not only do we need to focus on saving people’s lives we also have to focus on reducing the spread. We cannot allow this virus to spread at such an intense level”, she cautioned.

Samoa extends State of emergency for another month