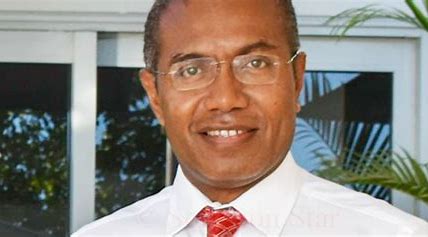 The Member of Parliament for East Areáre Constituency Peter Kenilorea Junior has urged all Solomon Islanders to allow MPs to undertake their duty in peace and to respect the outcome of the process.

Kenilorea posted this statement on Facebook as the nation prepares for the motion of no confidence against Prime Minister Manasseh Sogavare today.

“Fellow Solomon Islanders tomorrow (Monday) is an important day for us as a nation.

“While democracy is not perfect, I believe it’s the best system available to us in the governance of our nation, Solomon Islands,” Kenilorea said.

He said other democratic countries also have this provision in their respective constitutions and conventions.

“I therefore join other leaders, be they national, community, traditional or church leaders to call for calm as we, your representatives in parliament, deal with the motion of no confidence on the Prime Minister.

“Many of us, your representatives, across this nation have heard your pleas.

“Please allow us the opportunity to undertake our duty in peace. And please respect the outcome of the process,” the East Areáre MP said.

Meanwhile, the Royal Solomon Islands Police Force (RSIPF) has advised the general public in Honiara and Guadalcanal Province, that the Minister of Home Affairs, Christopher Laore has signed a liquor ban order to be enforced from 06 – 07 December 2021.

The Liquor Ban Order directs that all liquor licensed premises including bars, nightclubs and bottle shops in Honiara and Guadalcanal Province must not sell liquor and must be closed on the following dates:
(i) 06 December 2021.
(ii) 07 December 2021.

RSIPF appealed to all members of the public in the affected areas to comply with the Order, as police will be enforcing it. The liquor ban excludes those who are operating a hotel; they may sell liquor to bona fide guests accommodated at the Hotel.

This Order is made to control the consumption and sale of liquor in Honiara and Guadalcanal Province in the lead up to, during and after the Motion of No Confidence today….