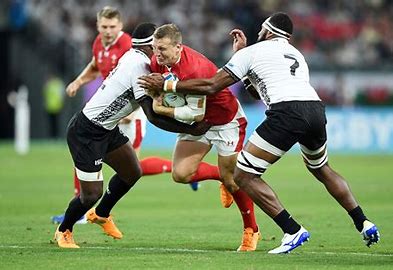 The World Rugby Council will consider a proposal this week to change the sport’s eligibility rules to make it easier for players to switch their international allegiance, following a three year stand-down.

“The professional game has made it harder,” he said.

“Yes, we get a little bit of money back from World Rugby after it holds a successful profitable Rugby World Cup, but can they argue that we had access to our best players who are not being used by tier one countries? Would we have been better off?

“I can probably answer that with just look what rugby league in their World Cup. It’s blatantly obvious that with our best players available, who really want to play for the country who have heritage, we would do really well.”

The longtime Hurricanes lock made his test debut in 1995 and played 27 times for Tonga and the Pacific Islanders but said many of his teammates growing up in Wellington were not able to represent their Pacific heritage.

“And you can see the frustration that they held, just having played a handful of tests,” he recalled.

“A good mate of mine, Filo Tiatia – who is now coaching Moana Pasifika – he could have been an amazing international player for Samoa. He bubbles everything for Samoa and you could see that him and his family were hurting – that opportunity wasn’t there for him. Ace had played for Samoa, his younger brother.

The “one country for life” rules was so strict, that some players had their eligibility captured without even playing a test match.

“There’s a lot of guys that had played a handful of tests or even for New Zealand ‘A’. Kupu Vanisi was another flanker that we had in Wellington. A class act that could have done so much more for Tonga (if he had not played in an All Blacks trial match),” he said.

“We love dearly the countries that we are growing up in but we are hugely tied to countries where our forefathers have been for 3000 odd years which we take big pride in what our family names are,” he said.

“But that’s probably something that the rest of the world don’t quite get that as Pacific culture we are heavily connected to our families.”

“…we want the opportunity to give back to the islands. We’ve given a lot to New Zealand, Australia now England, or Japan but we are asking the question, why can’t we go to give back to a country that that has held a really special place to us.”

The proposed changes to rugby’s eligibility rules would allow a player to represent a second country that they have a “close and credible link” to, either through birth or the birthplace of their parents or grandparents.

But former Manu Samoa lock Dan Leo is skeptical the proposal will get a fair hearing, especially when a 75 percent majority is needed for it to be adopted.

“They make it difficult, don’t they? Firstly the fact that Tonga – probably the biggest beneficiary of a change of eligibility laws don’t have a vote on the council at the stage,” he said.

“Then the fact that some of the bigger nations – bigger in population wise and probably finances, not necessarily in results – have three, three votes, you know, Italy, who are actually ranked below Fiji have three times as much voting power.

“So it’s messed up, and then you’ve got the, you know, the fact that the threshold for this eligibility law to pass is 75% almost makes it a non starter really.”

The CEO of Pacific Rugby Players Welfare said it felt like the eligibility vote was a bit of a box ticking exercise for World Rugby, to be able to say they’re reviewing it but there’s a very small chance it will go through.

“We can’t ever settle for that either – we have to keep pushing for at least a fair vote,” he said.

“Even Brexit, for instance, went through with a 50.002% vote and the UK came out of Europe – and that’s a massive issue that affects millions of people’s lives – so why are we why are we having to fight for something and all of a sudden World Rugby decide it’s 75%?

2So there are some double standards that we feel still need addressing, and those are probably wider systematic issues, as opposed to just this eligibility. As I said, the weighting of the council but also the fact that a lot of these votes are behind closed doors.”

Leo believes that even a three year stand-down is too long.

“The whole key is that we get plays in their prime not when they’re older…ultimately you’d have no stand-down period if they qualify and they’re unwanted and they haven’t been selected to come back and play straight away I’d love to see that.

“But I understand that there’s a lot of rugby fans that it’s a key argument we have to protect the integrity of the game and there’s a talk about how if you’re allowed to switch as quickly as they do in rugby league it would somehow cheapen the jersey.

2Well it wouldn’t cheapen our jerseys – Samoa and Tonga. If we were able to get some of our top-line players back straight away overnight that would increase the value in our jerseys and it would allow us to get sponsorship to get bigger games to get results to increase our rankings and our World Cup performances, which will automatically inject bucket-loads of cash into our unions, which would then be able to be invested into grassroots.”

The home unions like England, Scotland, Ireland and Wales are scared, Afeaki believes, that if Tonga and Samoa were able to call on the likes of Lima Sopoaga, Ngani Laumape and Charles Piutau they might just start winning.

“There’s a threat that we’ll be too good and, rather than beat us on the field with our best they can do that off the field by just restricting us and treating us like property.”

Leo said there is also some concern Fiji might vote against the proposed eligibility changes.

They’re probably pretty happy with the way they’re sitting on the top of the Pacific,” he said.

“They’ve been recipients of targeted World Rugby funding now for the last two World Cup cycles, which means they’ve had almost double the funding that Samoa and Tonga have had combined over the last eight years, and they’re in the top 10 ranking, got a Super Rugby team now, basically. Great, so all the arrows are heading in the right direction for them but the Pacific brotherhood has always stood strong and we like to think that when push comes to shove, we stick we stick together.

“The reality is if Fiji vote against at that vote it gives all of those nations – those that were potentially thinking about voting against as well – the perfect excuse because they’ll just look at it and go, well, if Fiji are going to vote against that then we don’t need to vote for it either.”

So, what would they say to World Rugby Council members if they had a chance to make one final pitch before they cast their vote on 24 November?

“It’s time to let the shackles off the smaller nations in the world who – especially the ones from the Pacific who have given so much to the game – and just imagine how competitive we could be with having our best players back in our colours,” Afeaki said.

“If we want to take rugby to where it used to be: about love, about passion, integrity then the right vote is to let us have our players back.”

While Pacific Island nations stand to benefit the most from returning players, a loosening of eligibility rules would also be a win win for the big teams, Leo argued.

“The game is driven by money. If we’ve got two teams who can automatically become potential quarterfinalists and we take that number up from, realistically, 10 teams to 12 or 14 teams the World Cup becomes a bigger spectacle. It becomes more of a global game. There’s going to be more money to go around – that’s going to massively impact World Rugby’s coffers and all of the tiers from tier one all the way down to tier three through the World Cup being the pinnacle and the main money driver for World Rugby.