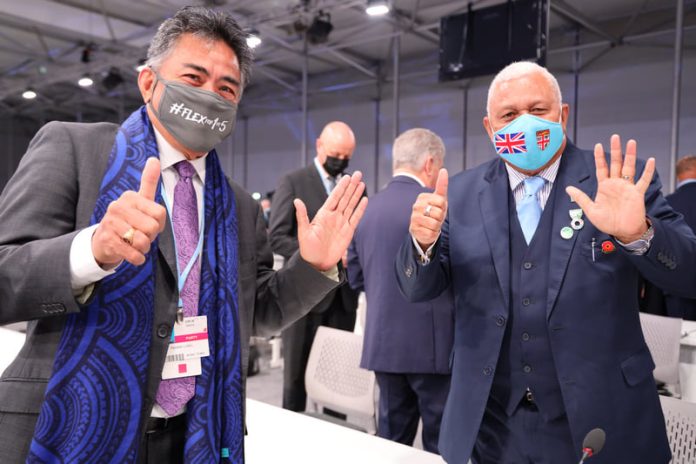 At the COP26 High-Level Event he hosted as the Forum Chair, Bainimarama said 1.5-degree is not just a preference –– it should be a promise that we do not break.

“To keep the 1.5 degree pathway alive, all countries must announce commitments for serious cuts in emissions by 2030, transition from non-renewable fossil fuel based industries and a commitment to net-zero by 2050. All countries must also work together to finalise the Paris Agreement rulebook.

“High emitting countries hold the levers for change. They have outsized control over our collective fate. They must take responsibility.

“Even if we achieve the 1.5 degrees threshold, countries at the frontlines, like our Pacific Islands, are facing unprecedented impacts,” said Bainimarama.

Bainimarama said last year alone, the total economic cost of disasters in the Pacific was around US$1 billion.

“Tropical Cyclone Pam in 2015 caused damage amounting to 63% of Vanuatu’s GDP and Tropical Cyclone Winston in 2016 wiped off one third of the value of our GDP in 36 hours wiped in addition to the tragic loss of life.

“That is why at COP26, developed countries must deliver on the US 100 billion finance commitment. We are now at the end of 2021, yet the US$100 billion expected by 2020 has not been delivered. This is unacceptable.

“Collectively, we must also establish a new climate finance goal for post 2025, with a better balance between adaptation and mitigation and dedicated finance for loss and damage,” he said

Bainimarama said many of the biggest polluting countries around the world, some of whom the Pacific consider as friends and allies, have abandoned their responsibilities and failed to take ambitious climate action.

“They have neglected their commitments under the Paris Agreement. A good friend will always be there in our hour of greatest need and it is not too late to change course. We must act urgently. We must act with the future of humanity and our one Blue Planet in mind.

“Our negotiations to resolve outstanding issues over the coming week remains our best chance to keep the 1.5 degrees threshold within reach, and avoid a global climate catastrophe.

“The 1.5 degree target can be reached because I believe in the potential of collective action and the power of humanity. I remain hopeful that the Leaders of those countries which have so far refused to act or have shown limited ambition will do the right thing at the end of the day. The future of their children and our children rests on it.

“I urge all of us to deliver the commitments to rapidly cut emissions and make this 26th COP the one that turns our climate crisis around and cements a climate legacy outcome we can be proud of.

Our window to act is now,” said Bainimarama.

He said the Pacific region has come to COP26 with a critical goal; a clear demand – to keep our world to 1.5 degrees.

“This is critical for the survival of Pacific nations and imperative for the well-being of the global community and the economies that connect us.

“We meet here in Glasgow as dire climate change impacts are being felt across our world. Right now, with global warming of over 1.1 degrees Celsius, our Blue Pacific continent is under siege from severe cyclones, rising sea levels, ocean acidification and erratic rainfall patterns.

“For low lying atolls, climate change has brought us to the abyss. We are being forced to normalise a state of constant existential threats.

“We are using words like resilience, innovation and adaptation to deal with the trauma and disruption of the internal displacement of entire communities and coastal cultures, loss of ancestral lands,” he said.

Forum Secretary General Henry Puna told the High level event it has been an arduous first week of negotiations.

“While there has been progress, the road ahead is far and challenging.

“However, I’m assured by your commitment in joining us today, to elevate our Pacific voice and ensure this COP holds to a 1.5 degrees world.

“Our Pacific leaders have been long and tireless advocates for climate change action. And they continue to lead the charge, pushing for action through all avenues including their recent Declaration on preserving maritime boundaries in the face of climate-change related sea- level rise.

“Forum Leaders have also endorsed the Pacific Resilience Facility to protect and prepare communities before a disaster strikes,” said Puna.

He said the recent IPCC report has shown with devastating clarity that climate change has the world headed for doomsday.

“ Climate change is not a far-off future scenario. It is here, as we are hit with floods, warming oceans, and rising seas. It is now, as we battle devastating cyclones, king tides and wildfires.

“The good news is that we have a window of opportunity to change this course, here in Glasgow.

“We have an opportunity to listen to the resounding calls of citizens from across our Blue Planet for ambitious climate change action.

“We have an opportunity to shape a future that is resilient and sustainable for our children and grandchildren.

“There is indeed a golden opportunity. This is also a grave responsibility,” said SG Puna.

“It is the single greatest threat that is destabilising the security of our livelihood at present.

“Emphasising that this COP is our last chance to make the bravest turning point in our lives for the better. However, having travelled all this way from the Pacific with the little we have, only to find an absence of influential world leaders, including the reluctance by some who made it with long overdue plans, is to be quite frank, really disheartening.

“Nonetheless, for hope, I stand firm. I stand on behalf of my fellow youth and pasifika family to amplify our collective voice,” she said.

Habu said their only hope for survival will be lost without urgent action.

“Time is not running out. Time HAS run out.

COVID-19 caused rise in TB deaths for first time in a...