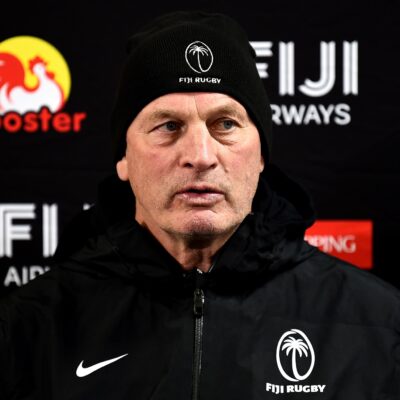 The Fiji Rugby Union (FRU), CEO John O’Connor today confirmed that he has received numerous queries regarding the status and involvement of Flying Fijians Head Coach Vern Cotter following the announcement Tuesday of the Flying Fijians 28-member squad, coaching panel and the management staff for the November tour.

O’Connor reiterates that Coach Cotter remains the Head Coach of Flying Fijians and that he and his set of assistant coaches based in New Zealand had full involvement in selecting the squad and assisted in the selecting support staff for the tour.

“It’s rather unfortunate that Coach Cotter and the assistant coaching staff and management including the Southern Hemisphere players could not travel to the North, but this hasn’t dampened their involvement in the selection of the team,” O’Connor explained.

Coach Cotter and his assistant Coaches work in very close collaboration throughout the campaign to ensure continuous momentum from the July test matches against the All Blacks.

Cotter said it’s a unique situation but with the assistance of his coaches based in New Zealand, they have managed to assemble a great team with an experienced set of coaches from Europe.

He added “I got in touch with Dugan Hodge who was my assistant in Scotland, Rory Best, who I knew from my time with Scotland, he also captained the Irish team during the Six Nations and then we always had Richie Gray up there who was part of the Autumn Nations Cup and Gareth Baber who is in Europe and has experienced working with Fijian players became a natural choice to take over my position for this tour.

“We are constantly meeting each other on zoom calls, exchanging information on what we were doing, our themes in set pieces and line-outs and other points that need to be driven to make this team better with the players we have selected.

Coach Cotter said “We will be in touch with them moving into the game with regards to game strategy and team selection.

“We don’t want to get into the way either but we will certainly have our views about the matches before preparing for each match.

“It’s been an open exchange of ideas whereby we have freely given our knowledge of the team and players and we have offered videos of our past training sessions to continue our themes, he added.

Cotter believes the players will play a vital role in assisting the coaches to formulate a competitive team for the three test matches against Spain, Wales and Georgia.

“The players themselves are experienced and they will take a lead role in this to ensure there is continuity.

“They will also have to stand up and take responsibilities as well for the campaign.

“I believe they will give their best shot because they are passionate about the team and they want to do well so that we have a better journey to the 2023 Rugby World Cup in France,” Cotter concluded.

The team assembles on the 31st of this month to start their preparations, they then face Spain on the 7th of November in Madrid.

The Flying Fijians will travel to Wales and will face the Dragons on the 15th of November before wrapping up the Northern Hemisphere tour against Georgia five days later. The venue and time is yet to be confirmed.