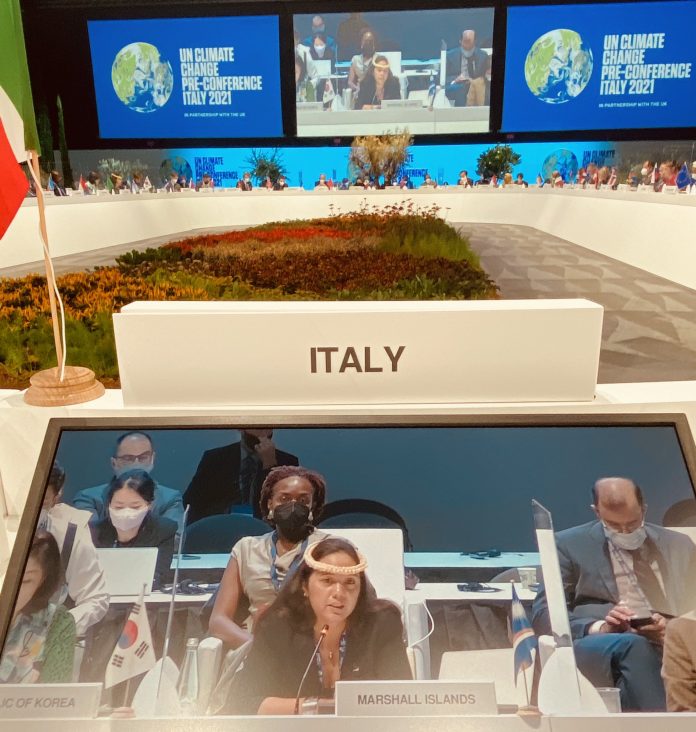 The Pacific is making a desperate plea to the world’s wealthy nations: Step up and deliver on your promises to fight the global climate crisis.

The call comes as climate ministers hold final talks before a key UN conference in Glasgow next month.

One of the biggest issues holding up progress is the question of money, a pre-COP26 summit was told last weekend.

Despite significant new promises, the wealthy nations are still around US$20 billion short of the long-promised US$100bn that’s meant to help poorer countries cope with rising temperatures.

Stege told a media conference following the pre-COP26 talks that the delivery of the US$100bn is a ‘foundational element’ in the fight against the climate crisis.

“We also expect actions on ambitious mitigation measures and outcomes that reflect the urgency of adaptation and a commitment to building resources to meet the demands of this moment,” she said.

“This includes communication and reaching across countries negotiating this extremely complex and challenging processes.

“We are in a more complex reality now than we were in Paris to champion 1.5 degrees. And there’s no question that 1.5 is a goal that still remains out of reach.

“But it is also clear from the science that there is hope for 1.5 in this decade. So, we must ensure that we keep 1.5 on the table,” Stege said.

How is that done? Put it simply, Stege said all eyes are on the G20 or Group of 20 comprising 19 countries and the European Union (EU).

“We do have hope. But it is hope that is only based on action that must be taken by numbers of the G20 to step up and deliver 1.5-aligned NDCs and targets ahead of the COP.

“On adaptation, the coalition was very clear that we need a paradigm shift on how we deal adaptation systemically on a global level. And it means addressing the reality that it is something that will affect all of us and already affects many of us across the world.

“This COP needs to send a strong signal that adaptation is a critical component of ambition. Everyone at the meeting agreed we absolutely need to meet the US$100bn. The delivery of that is a foundational element of the success of COP”

Stege said the world has less than a month until the COP26 summit next month and “we need courage we need hope and we know that we will need to keep fighting down to the wire until the very last days to Glasgow.”

Meanwhile, the UK’s High Commissioner to Australia has warned the COP26 host nation will be “very disappointed” if Australian Prime Minister Scott Morrison fails to attend the climate talks in Glasgow.

The Australian state of New South Wales, the country’s biggest coal producer, has reportedly announced it expects to cut its emissions by 50 percent from 2005 levels by 2030.

NSW officials have said they are “stepping up climate action in a country seen as a global laggard”.

The Marshal Islands’ climate envoy said the droughts, worsening storms and rising seas should be a clarion call to the wealthiest 20 nations that produce 80 percent of greenhouse gas emissions.

“We need to see changes in the real economy, and governments making decisions that encourage markets to shift with the times. Two very obvious things that come to mind: phasing out fossil fuel subsidies and ending coal – steps that could drastically reduce emissions and enable a transition to a green economy.”

If the rhetoric is not met with political action, the world will remain on track for a temperature and sea-level rise that has not even been modelled, Stege warned.

The High Ambition Coalition (HAC) is an informal group of 61 countries set up within the UN Framework Convention on Climate Change (UNFCCC).

In a statement, the coalition – founded by the Marshall Islands in 2014 – said it’s committed to advancing progressive proposals on climate ambition.

The aim is to ensure the Paris Agreement, adopted in 2015, is as ambitious as possible. The group succeeded in securing the Paris Agreement’s most ambitious provisions, including the five-year ratchet-up cycles of nationally determined contributions, as well as the language in Article 2 related to pursuing efforts to limit the temperature increase to 1.5 degrees Celsius above pre-industrial levels.

The Marshall Islands serves as the convener and secretariat of the HAC.

There is no official list of the group’s members but as of 2018, Fiji and New Zealand are among the HAC countries.

Criticism has since focused on the name compared to the pledges made by the member states and since 2019, many of the listed countries are not well on track to achieving the general Paris agreement goals.