A Pacific government which has sought to expedite deep sea mining used its UN platform to make a pitch for an industry that is unpopular with ocean peoples.

There’s great interest among advocates of the fledgling sector in the polymetallic nodules found on the deepest seabed of the Pacific, but few regional countries are on board.

Polymetallic nodules are lumps found on the seafloor which are known to contain metals such as manganese, ganesenickel, copper, cobalt and other minerals.

These eagerly sought after materials are integral for lithium-ion batteries and storage, among other uses.

Nauru recently invoked a rule at the International Seabed Authority (ISA) to allow seabed mining to commence within two years in its waters.

Ocean scientists, environmentalists and Pacific civil society have criticised the move and repeatedly urged a pause on any start to mining.

However, Nauru’s president Lionel Aingimea told the UN General Assembly that the fledgling sector was a vital component in the fight against climate change.

“Accessing these polymetallic nodule resources is critical to building the clean energy transitions we need, and towards a circular economy.

“These polymetallic nodules are needed to transform big and small countries’ energy systems, and support our fight against the climate crisis.”

Nauru is one of four Pacific Island countries who have approved licenses for exploration in their waters. The others are Kiribati, Tonga and the Cook Islands.

They’re going against the grain of the Pacific push for ocean health, a chief advocate of which is Fiji’s Prime Minister Frank Bainimarama, who told a conservation event on the sidelines of the General Assembly that his country had banned deep sea mining. 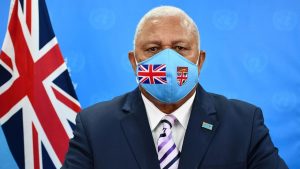 “Humanity is not above nature. We are part of it. And the arrogance of thinking otherwise is costing us dearly,” he said.

“Fiji is committed to the 100 percent sustainable management of the ocean, with 30 percent declared as marine protected areas. We have banned deep sea mining in Fijian waters,” said Bainimarama.

According to Aingimea, his country has a right to explore the possibilities of deep sea mining.

“We look forward to working with ISA members and observers to develop environmental regulations that help ensure any exploitation in sea floor collection operations are conducted safely and responsibly.”

But ocean scientists such as Douglas McCauley, the head of the of the Benioff Ocean Initiative at the University of California, Santa Barbara, say there should be a pause on any mining activity until more research is conducted on the farthest depths of the ocean, perhaps the least studied part of the planet.

While there is still much to be learnt, McCauley said the damage risks were high for such a slow-evolving ecosystem as the ocean floor.

While advocates of mining say the seafloor nodules are critically needed for batteries for electric vehicles, McCauley said there was more potential in recycling of old batteries already in the waste cycle, in order to meet renewable energy’s demand for metals.

Development of environmental regulations for seabed mining is also where New Zealand’s government is pinning its focus in the ongoing debate around seabed mining.

But its abstention on a recent vote for a moratiorum on seabed mining at the IUCN World Conservation Conference drew plenty of criticism in parliament.

Foreign Affairs Minister Nanaia Mahuta was unapologetic for New Zealand not voting with the majority.

“Our position on that particular motion, alongside the UK, USA, Australia, Canada, France, was set to ensure that we continue to work in a very strong way to build the regulatory framework through the ISA to guide countries in their sovereign determination of deep sea mining,” she said.

The New Zealand Maori Party’s Debbie Ngarewa-Packer was one of several MPs who grilled the minister on seabed mining.

“What will she say to tagata whenua in Aotearoa and tagata moana across the Pacific who have been consistently opposing this destructive mining of the seabed?” Ngarewa-Packer asked.

In reply, Mahuta doubled down on New Zealand’s position that it participates in the ISA to ensure there is a strong regulatory framework to guide the industry.

The position of most Pacific Island governments is reflected by the Secretariat of the Pacific Regional Environment Programme’s (SPREP) recent recommendation for a 10-year moratorium on deep sea mining.

Meanwhile, with global efforts to increase protection for the deep ocean gaining pace, investors appear to have taken flight from one of the main entities seeking to mine the Pacific seabed, The Metals Company.

Formed out of a merger involving DeepGreen Metals, a company with multiple exploration licenses in the Pacific and close ties to Nauru, the miner has seen its share price plunge this month.