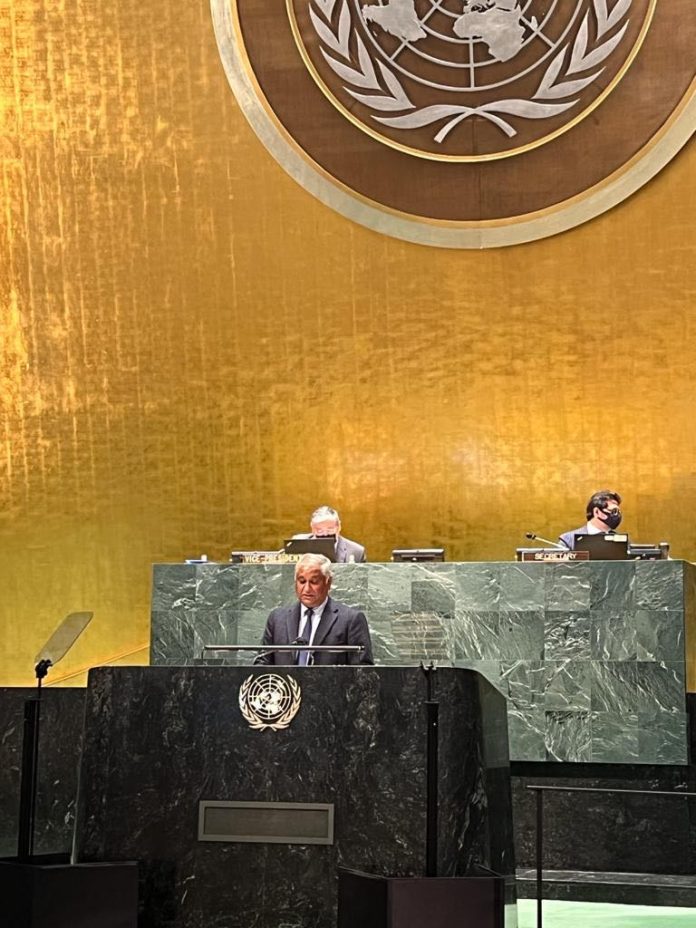 On behalf of the Pacific Islands Forum, I am honoured to deliver this statement as we commemorate and promote the International Day for the Total Elimination of Nuclear Weapons.

Today, I would like to highlight progress and reiterate calls that have been made over the past years from our Blue Pacific Continent.

These are significant milestones for our Forum family, particularly in the context of our historical and political landscape, reflecting our Leaders’ deep concern over the nuclear arms race and risk of catastrophic nuclear war. Sadly, these threats remain today.

Notwithstanding the overall reduction in nuclear weapon arsenals since the time the Rarotonga Treaty was adopted, we note with concern that as of the beginning of 2021, it is reported that nine states1 possessed approximately 13,080 nuclear weapons. A significant and increasing number of which are kept in a state of high operational alert.

We underline our grave concern over the continuing threat of nuclear weapons proliferation to the peace and security of our planet and stress that their total elimination remains our highest disarmament priority.

We call for an end to all actions inconsistent with Article VI of the landmark Treaty on the Non-Proliferation of Nuclear Weapons (NPT), such as the qualitative improvement of existing nuclear weapons and the development of new types of such weapons.

Excellencies, our nuclear weapons-free zone is a key contribution of our region to the common global goal of the non-proliferation and elimination of nuclear weapons and promoting international peace and stability.

Our Blue Pacific encompasses ocean space and land territory of significant maritime and geostrategic influence. We re-emphasise our determination to ensure that the bounty and beauty of the ocean space, land territory and the airspace above them shall remain the heritage of our peoples and our descendants in perpetuity to be enjoyed by all in peace.

As the world’s second nuclear weapons-free zone in a populated area, the Pacific has served as a source of inspiration for other regions in the world, a key contribution of the Pacific Islands Forum to the region and to the global effort on non-proliferation. Indeed, we are encouraged by the existence of nine nuclear-weapon-free zones, states and geographical regions, spanning more than 100 states and covering the Southern Hemisphere.

We commit to continued cooperation with all nuclear weapon-free zones in pursuit of our common interests and objectives, including in the lead up to the Review Conference of the Parties to the NPT in 2022.

In pursuit of universal disarmament, we reaffirm the importance of key multilateral treaties, in particular the NPT, and we strongly call on all nuclear weapon States parties to the Treaty to honour their disarmament obligations under Article VI of the Treaty.

We reiterate the ongoing calls by our Pacific Islands Forum Leaders for remaining countries to accede to the Comprehensive Nuclear-Test-Ban Treaty. We also note the entry into force of the Treaty on the Prohibition of the Nuclear Weapons (TPNW) in January of this year.

For us, the ongoing struggle with the legacy of nuclear testing, from transboundary contamination of homes and habitats to higher numbers of birth defects and cancers, vests in the Pacific both a legal right and moral standing to demand that nuclear weapon States commit to their respective disarmament obligations under international law.

We recall concerns about the environmental impacts of the Fukushima Daiichi Nuclear Reactor accident in 2011 and we are accelerating efforts to prevent harm to our Blue Pacific. We acknowledge Japan’s efforts to date and its engagement with the International Atomic Energy Agency.

With growing interest in nuclear energy as a form of clean energy, we strongly urge all states to fully comply with the NPT safeguards on peaceful nuclear activities, and all related international law obligations, to ensure to the highest safety levels the prevention of any risk or harm to our ocean and our Blue Pacific, particularly from radioactive disasters that result in the transboundary spread of radioactive material and radioactive waste.

Excellencies, we reaffirm unity in our continued commitment to a nuclear-weapons free Pacific and a nuclear-weapons-free world. We renew our call to all nuclear weapon states and alliances to accelerate all efforts towards total elimination of nuclear weapons for the peace and prosperity of our entire global family.