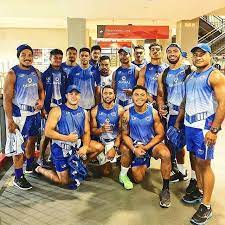 The Pacific Islanders have been in Dubai since failing to reach this summer’s Tokyo Games after losing in the semi-finals of the preliminary tournament on June 20.

They remain in the Middle East after being unable to satisfy strict entry rules linked with blood tests to enter Samoa.

“The well-being of players is our priority and we proposed our help, in line with the Samoan government, to explore with urgence all options to bring the players home as quickly as possible and in all security,” World Rugby told AFP.

Earlier, the chief executive of Pacific Players Welfare and former Samoa lock Dan Leo claimed on social media the squad must wait until July 27 to “determine a date to travel back to Samoa.”

“Wonder if they’d be treated this way if they had been successful in qualifying for the Olympics? Probably would have been a first class flight organised for them by govt,” he added.