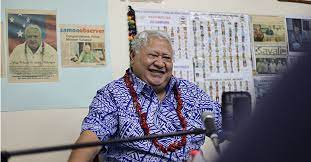 The caretaker Prime Minister Tuilaepa Sa’ilele Malielegaoi claims the Samoa Observer Newspaper has long been trying to topple the Government.

Speaking on the state-owned 2AP radio programme on Thursday, Tuilaepa accused the country’s only daily newspaper of being the champion in “twisting stories and fabricating news” with the intention to tear down the Government.

He alluded to the claims whilst responding to queries from the radio host on the topic of the vaccination process in Samoa.

Tuilaepa highlighted the importance of why Samoans should get their Oxford-AstraZeneca COVID-19 vaccine.

It was then that he wielded the axe at the Samoa Observer, signaling out an article published by this newspaper that claims that the vaccination process in Samoa is “delayed.”

“That article was based on the views of an unrecognised organisation from overseas,” said Tuilaepa.

“But that is a tactic used by this newspaper where they look for flaws in the Government. They always find ways to ruin the good name of Samoa.

“That newspaper is well-known for twisting words and fabricating news.

“And these stories are written by a very young girl, who comes here [to his office] sometimes and just sits there without asking me any questions.”

Tuilaepa then made reference to an event where he was interviewed by two reporters, one from Newsline newspaper and one from Samoa Observer, questioning the early release of the Chief Justice from quarantine upon returning from New Zealand in May this year.

“I was asked to respond to claims from the Sa’o Fa’apito [Fiame Naomi Mata’afa] saying that the decision to release the Chief Justice after being in quarantine for one week was a political move.

“And I cleared the air at the time and told her [reporter], to refrain from thinking in such a way because it will give people the wrong idea, as it questions the independence of our judiciary.

“But when the stories came out, the story from Newsline was accurate but the story from the Samoa Observer indicated that I blamed the judiciary for what that.

“It is my prayer every day that there will come a time, maybe before 2100, where that newspaper [Samoa Observer] will print accurate information.”

He did not stop there. He went as far as accusing the Samoa Observer of “brainwashing Samoans residing overseas.”

“The information and stories printed and published by the Observer have been used by other people to attack me saying I look down on other people and all sorts of accusations.

“But I laughed when they mentioned the name Observer, because that newspaper is well-known for fabricating news, and that is why people don’t buy their paper anymore.

“I wrote a letter to the newspaper just  [Wednesday] to correct one of the stories they published.

“They have brainwashed our people residing overseas with the wrong information and stories they publish.

“It has always been their motive to tear down the government yet they continue to fail to deliver on that.”, he said.