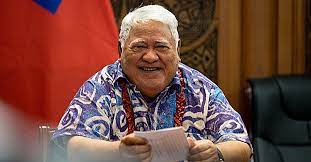 Lotofaga Member-elect Fiame Naomi Mataafa has accused Samoa caretaker Prime Minister of “promoting lawlessness” by saying a 21 May election will go ahead despite it legally still being an open question being argued in court.

“That is not a position for a Prime Minister to take,” she told the Samoa Observer of Tuilaepa’s recent statements.

“Since I left the Government there were concerns about the erosions of the rule of law and we’re seeing examples… even to the extent where [Tuilaepa was] saying that he will go against the courts.”

Mata’afa said the Prime Minister was “living in a dream world” if he thought that an order for a 21 May election by the Head of State could not be struck down by the Supreme Court.

“It won’t be legal [to proceed with an election],” she said.

“If the court cases go our why then he should respect the rule of law.

“I don’t know how he thinks he’s going to do that. He is very familiar with the democratic process.”

Earlier this week in response to Samoa Solidarity International Group protests the Prime Minister said that the courts did not have any check over his authority.

In addition to saying that the election would proceed, Tuilaepa said he would allow for election petitions (or legal challenges) to go ahead and, if his Human Rights Protection Party, lost its numbers in power, move to the opposition benches.

Mata’afa rejected the idea and said the Prime Minister’s rhetoric was misleading and without logic.

“He’s trying to hedge his bets,” she said.

“On one hand he’s promoting lawlessness on the other he’s saying he’d respect the rule of the court.

She said the court was yet to rule on the validity of the results of last month’s national poll and until it did no political outcome should be viewed as certain.

“It’s about the election that happened on the 9th [of April] and forming a Government,” she said.

“If the court confirms that then that’s what the people have voted on.

“This is a democracy and we should follow the laws. We should not in any way encourage any other power except the will of the people.”

Speaking during his TV3 programme on Wednesday, Tuilaepa said regardless of their rivals’ announcements that there will not be an election happening, the fresh election will take place on 21 May, 2021.

(A snap, second election following the 09 April polls was announced last month for 21 May. The decision by the Head of State, Tuimaleali’ifano Vaaletoa Sualauvi II to call a fresh election to break a 26-all tie between political parties is currently the subject of a Supreme Court legal challenge).

He said with the new election officially scheduled, the electoral petitions already before the Court should be heard for the sake of records and to address allegations of corrupt practices.

“The [fresh] election will happen. It won’t be stopped because the decision has been made,” said Tuilaepa.

“The elections will push through while the Judiciary has also made their decision to continue with the cases for the records of the Government.

“[…] In terms of the ongoing court cases, they are only for the purposes of keeping Government records for the future, but it is also important for the Judiciary and also for us Members of Parliament so we know that nothing improper can be hidden.”

Tuilaepa acknowledged the judiciary’s decision to carry out the electoral petitions as per usual processes, saying it is imperative in stamping out corrupt practices during elections plus records for future reference.

“The importance of those cases is to address the giving away of money as it is not appropriate; declaring it as a roadshow when it clearly undermines the laws.”

The caretaker Prime Minister’s reference to a roadshow pertains to the FAST party series of roadshows rolled out across the country in the lead up to the 09 April polls.

“So, I am happy that they have decided to continue with their court processes for future reference, it’s useful to ensure there is justice in the electoral processes and to correct this issue,” said Tuilaepa.

“And if the results show that we lose, then we will leave happy and thankful to God that the choice of the people who own this Government, voters, that one Party will stand in the office while the other takes opposition.

“If it is us that are chosen to oppose the Government, we will be happy to do so.”

Tuilaepa then thanked the Head of State for his wisdom in seeing the need that Samoa needed a fresh election.

He also scoffed at the (FAST) party leader’s announcement that there will not be an election and that they are not preparing for one.

“This doesn’t matter, they can do what they want whereas we are announcing that there will be another election and that we should all prepare,” said Tuilaepa.

“That is the announcement from the Sa’o Fa’apito, in case they forget that yes, [Mata’afa] does not have an election, and even I don’t have an election because we are still using the previous nominations.

“So we have four candidates unopposed, maybe that is what Fiame is referring to, in case it misleads other candidates, leaving only us contesting in the election.”

Tuilaepa said the historical events unfolding in Samoa must serve as a reminder for the people of Samoa not to think lightly about their votes.

“They need to look beyond the election day because beyond that polling day, the results of their vote will fall upon their children. Therefore, do it with intent, use your vote wisely, do not take it lightly,” he said.

“The reason why we are in this situation right now is because the people did not take their votes seriously. We have no government, only a caretaker Government,” said Tuilaepa.