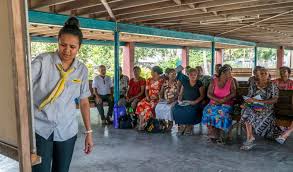 Preliminary data, collected as part of an ongoing study into Pacific women’s leadership in business by the Asian Development Banks’s Pacific Private Sector Development Initiative, finds the Pacific compares favourably with global averages across many measures of leadership. The study measures women’s representation on boards and senior management positions in over 200 Pacific private sector organisations.

While varying significantly between countries and sectors, the average Pacific regional proportion of women on boards is 22%, exceeding the global average of just 17%. Some sectors are higher. In financial and ICT organisations, 24% of board members are women, and in industry associations (such as tourism associations), 31% of board members are women. The Cook Islands, Palau and Samoa all have over 30% representation of women on boards. Women hold 30% of senior management positions in the organisations studied, consistent with the global average. In the Cook Islands, Palau, Samoa, Tonga and Vanuatu, the proportion of women in senior management was over 30%.

An increasing number of Pacific businesses are developing gender and diversity policies.

Progress is particularly evident among the companies listed on the South Pacific Stock Exchange (SPX). Women’s representation on SPX-listed boards rose from 12% in 2017 to 24% in 2020, and the number of companies with no women directors fell from 63% to 11%. Four of the 19 listed companies now have gender-equal or majority women boards, including one woman board chair. These gains are strengthened by initiatives such as the updated SPX listing rules, requiring companies to report on gender diversity initiatives in their annual reports.

While the private sector remains small in many Pacific countries, these findings are significant because they suggest a growing commitment among the region’s private sector organisations to address the persistent challenges women face in reaching leadership positions. These constraints include caring responsibilities, fewer training and promotion opportunities, lack of business networks and social norms that continue to dictate women’s career paths and perceptions of their leadership capacity and commitment. Unsupportive workplaces can also contribute to women dropping out of the workforce at higher rates than men.

An increasing number of Pacific businesses are developing gender and diversity policies to overcome these challenges. In 2019, Mark One Apparel in Fiji opened an on-site childcare centre, the first in Fiji, which has attracted and retained skilled women who might not otherwise be in the workforce. Pleass Beverage in Fiji offers dedicated training and mentoring opportunities for women to build their skills and confidence to take on leadership roles. These efforts have resulted in greater retention of women and a higher proportion of women taking on management roles.

Private-sector organisations are also increasingly setting gender targets and reporting progress – both critical actions in improving gender equality. A target introduced by Tonga Power Limited to increase the number of women in their workforce by 5% each year has helped lift the proportion of women employees to 25% and supported the appointment of its first woman board member in 2020. The regional Pacific Power Association maintains a gender portal with regional benchmarking through sex-disaggregated reporting on the composition of the power sector workforce.

These results show genuine progress, but the data also confirms that women continue to be constrained when attempting to reach the highest levels of leadership. Across the sample, women held just 15% of chief executive officer positions. Notwithstanding the increases in women’s representation on boards in the Pacific, the proportion of women holding board chair positions is considerably lower, at just under 10% – consistent with the global trend.

Although the Pacific compares well with global averages for women’s leadership in business, these averages themselves reflect ongoing global inequality. The Pacific’s goal, and the global goal, must be equality in leadership in all countries and sectors.

Continued efforts towards equal representation in leadership are critical, not only for gender equality, but also for continued economic growth. A growing body of global research, including recent reports from the Bankwest Curtin Economic Centre and Women’s Gender Equality Agency, the Pipeline and the Peterson Institute for International Economics, shows that increasing the number of women on boards and in senior management improves company performance, productivity and profitability.

Throughout the private sector in the Pacific, a slow but steady rise in women’s representation in senior management and leadership is occurring as more pathways to these positions are created. Achieving equal representation of men and women in leadership will take continued effort. The private sector data shows that, with appropriate motivation and dedicated action, it is possible to accelerate change and promote women’s equal representation as leaders in the Pacific…. PACNEWS